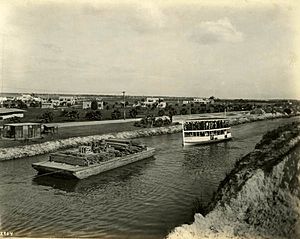 The Miami Canal, or C-6 Canal, flows from Lake Okeechobee in the U.S. state of Florida to its terminus at the Miami River, which flows through downtown Miami. The canal flows in a south and southeasterly direction for approximately 77 miles, and passes through three counties: Broward, Palm Beach, and Miami-Dade. It was constructed in the early part of the 20th century to drain the Everglades Agricultural Area (EAA). Removing the canal was proposed as part of the Restoration of the Everglades.

All content from Kiddle encyclopedia articles (including the article images and facts) can be freely used under Attribution-ShareAlike license, unless stated otherwise. Cite this article:
Miami Canal Facts for Kids. Kiddle Encyclopedia.