Kids Encyclopedia Facts
Not to be confused with Brevard County, Florida.

Broward County is a county located in the U.S. state of Florida. As of 2010, the population was 1,896,425, making it the second-most populous county in Florida and the 17th-most populous in the United States. Its county seat is Fort Lauderdale.

Broward County is part of the Miami metropolitan area, which was home to an estimated 6,012,331 people at the 2015 census.

Although the area has been settled since about 1400 B.C., Broward County was founded on October 1, 1915. It was named for Napoleon Bonaparte Broward, Governor of Florida from 1905 to 1909, remembered for his campaign to turn the Everglades into "useful land". It was originally intended to be named Everglades County, but then-Speaker of the Florida House of Representatives Ion Farris amended the bill that established the county to be named after Broward. In 1915, Palm Beach County and Dade County contributed nearly equal portions of land to create Broward County.

Broward County began a huge development boom after its incorporation, with the first "tourist hotel", in Fort Lauderdale, opening in 1919. A year later, developers began dredging wetlands in the county in order to create island communities. By 1925, the boom was considered to have reached its peak, but a 1926 hurricane caused economic depression in the county. The structure of county government was signed into law in 1975 with the passage of the Broward County charter.

At its inception, Broward County was considered a leader in agricultural products and services within the State of Florida .

Broward County has an average elevation of six feet (1.8 m) above sea level. It is rather new geologically and located at the eastern edge of the Florida Platform, a carbonate plateau created millions of years ago. Broward County is composed of Oolite limestone while western Broward is composed mostly of Bryozoa. Broward is among the last areas of Florida to be created and populated with fauna and flora, mostly in the Pleistocene.

Broward approved the construction of Osborne Reef, an artificial reef made of tires off the Fort Lauderdale beach, but it has proven an environmental disaster.

In 2010, 4.7% of the population considered themselves to be of only "American" ancestry (regardless of race or ethnicity.)

As of 2010, Haitians made up the largest population of immigrants, with Jamaicans coming in second, Colombians in third, followed by Cuban exiled refugees in fourth place, then Peruvians, Venezuelans, Brazilians, Dominicans, Canadians, and Mexicans being the tenth highest group of expatriates.

As of 2010, 63.44% of all residents spoke English as their first language, while 22.22% spoke Spanish, 5.42% French Creole (mostly Haitian Creole,) 1.48% Portuguese, 1.41% French, and 0.59% of the population spoke Italian as their mother language. In total, 36.56% of the population spoke languages other than English as their primary language. Since many immigrants are coming from the Anglophone Caribbean, where English is spoken, the change is not as fast as the rate of immigration would suggest.

Construction is underway on a network of recreational trails to connect cities and points of interest in the county. 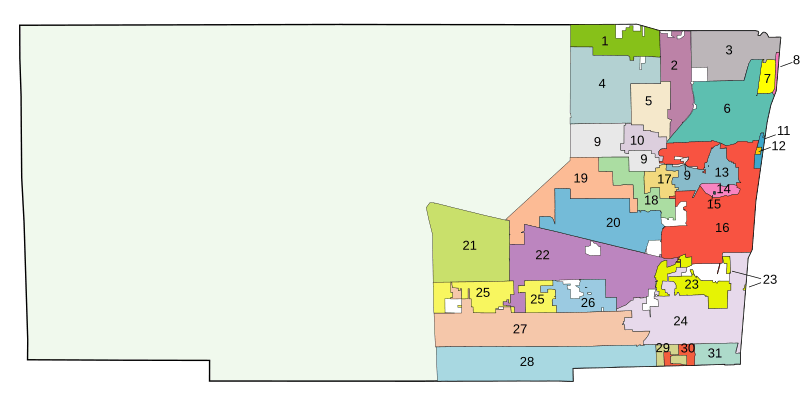 Municipality populations are based on the 2010 Census.

Broward boasts some notable attractions. The Museum of Discovery and Science is located in downtown Fort Lauderdale. The International Swimming Hall of Fame is located near the Atlantic Ocean, also in Fort Lauderdale. The International Game Fish Association, including the Fishing Hall of Fame & Museum, is located in Dania Beach. Flamingo Gardens is a botanical garden and wildlife sanctuary. Butterfly World, another botanical sanctuary, is located in Coconut Creek. Sawgrass Mills, a large outlet shopping mall, is located in Sunrise. Also, the NHL's Florida Panthers play their games at the BB&T Center in Sunrise. There are also multiple entrances to Everglades parks. In Pompano Beach is the Festival Flea Market Mall, America's largest indoor flea market. The African-American Research Library & Cultural Center off of Sistrunk Avenue in Fort Lauderdale boasts more than 75,000 books and materials on the experiences of people of African descent in the Caribbean, Central and South America and the United States. Other destinations of note are the Fort Lauderdale Swap Shop (colloquially known to locals as simply the Swap Shop), Riverwalk (Fort Lauderdale), and Beach Place, a strip of stores, restaurants, and bars situated across the street from the beach along the Atlantic coast in Ft. Lauderdale.

With 23 miles of beach, Broward County is a popular destination for scuba diving, snorkeling, and droves of young Spring break tourists from around the world.

All content from Kiddle encyclopedia articles (including the article images and facts) can be freely used under Attribution-ShareAlike license, unless stated otherwise. Cite this article:
Broward County, Florida Facts for Kids. Kiddle Encyclopedia.