Coral Springs, officially the City of Coral Springs, is a city in Broward County, Florida, United States, approximately 20 miles (32 km) northwest of Fort Lauderdale. As of the 2010 United States Census, the city had a population of 121,096. It is a principal city of the Miami metropolitan area, which was home to an estimated 6,012,331 people at the 2015 census.

The city, officially chartered on July 10, 1963, was master-planned and primarily developed by WCI Communities, then known as Coral Ridge Properties, a division of Westinghouse. The city's name is derived from the company's name, and was selected after several earlier proposals had been considered and rejected. Despite the name, there are no springs in the city; Florida's springs are found in the central and northern portions of the state.

During the 1970s, 1980s, and 1990s the young city grew rapidly, adding over 35,000 residents each decade. Coral Springs has notably strict building codes, which are designed to maintain the city's distinctive aesthetic appeal. The city government's effective fiscal management has maintained high bond ratings, and the city has won accolades for its overall livability, its low crime rate, and its family-friendly orientation. 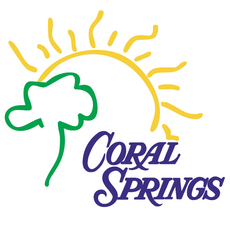 Coral Springs is a planned community. Prior to its incorporation as a city in July 1963, the area which is now Coral Springs was part of 20,000 acres (81 km2) of marshy lands bought by Henry Lyons between 1911 and 1939. After several floods in 1947, Florida created the Central and Southern Florida Flood Control District (now the South Florida Water Management District). Canals and levees drained much of the area upon which Coral Springs was built. After the land was drained and cleared, most of the area was used as a bean farm. After Lyons' death in 1952, his heirs changed the focus to cattle.

A post-World War II real estate boom in South Florida attracted the interest of developers. Coral Ridge Properties, which already had several developments in Broward County, bought 3,869 acres (16 km2) of land from the Lyons family on December 14, 1961 for $1 million. The City of Coral Springs was chartered on July 10, 1963. Other names that were considered for the new city included "Curran Village," "Pompano Springs" and "Quartermore". By 1964, the company had developed a master plan for a city of 50,000 residents. On July 22, 1964, the first sale of 536 building lots netted $1.6 million. The landmark covered bridge was built that same year to promote the town. In 1965, Coral Ridge Properties bought an additional 6,000 acres (24 km2) from the Lyons family, increasing the city's land area to 16 square miles (41 km2). The first city government elections were held in 1967.

The city added nineteen public schools, a regional mall, shopping centers and parks during the last three decades of the twentieth century in response to rapid population growth. The construction of the Sawgrass Expressway in 1986 brought even more growth. A museum and a theater opened in the 1990s. The city reached residential build-out in 2003 and is very close to a commercial build-out.

Coral Springs was ranked as the 27th best city in the United States in which to live by Money Magazine in 2006; was named the 10th safest city in the US by Morgan Quitno in 2007; and was a multiple recipient of America's Promise "100 Best Cities for Young People" award, identified by the group as a three-time winner in 2008. In 2007, Coral Springs became the first state or local government in the nation to receive the Malcolm Baldrige National Quality Award.

In 2010, CNNMoney.com listed Coral Springs as the 44th best place to live in the United States. 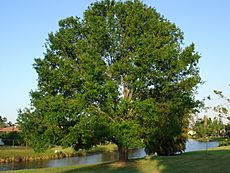 A canal in Coral Springs

Coral Springs is a sprawling city, with few tall or prominent structures. The tallest building in the city is a 12 story condominium (Country Club Tower), with five more buildings topping out at 10 stories, including three office buildings lining University Drive, one of the city's main roads. Buildings include Preferred Exchange Tower (originally the Bank of Coral Springs Building), 210 Tower, Bank of America Center and the Briarwood Towers.

Coral Ridge Properties established strict landscaping and sign laws for the city—a question in the original version of Trivial Pursuit noted that the city hosted the first McDonald's without the distinctive Golden Arches sign. Restrictions on commercial signs, exterior paint colors, roofing materials, recreational vehicle and boat storage, and landscaping specifications are all strictly enforced; consequently, real estate values in the city are significantly higher than the county as a whole. In 2006, the median price of a single family home in Coral Springs was US$415,000, while the median price county-wide was US$323,000. 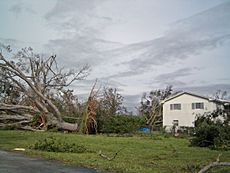 The city's downtown is the focus of an extensive redevelopment plan, estimated to cost close to US$700 million. The plan to revitalize the city's core started with an open-air shopping and entertainment center—"The Walk"—and progressed with the construction of "One Charter Place," opened April 2007. When completed, the redeveloped downtown area will offer office, retail, and a new government center, encompassing approximately three million square feet of floor space, in addition to approximately 1,000 residential units and a new hotel.

The City of Coral Springs' Parks and Recreation Department operates over 50 municipal parks, including a water park and a skate park, encompassing over 675 acres (2.7 km2). Coral Springs' largest park is Mullins Park (70 acres). Of the four conservation areas in the city, Sandy Ridge Sanctuary is the biggest, at 38 acres (150,000 m2).

Average monthly rainfall is higher from April to September, with January and February as the driest months. The average monthly rainfall ranges from 2.8 inches (7 cm) in January and February to 7.3 inches (19 cm) in June. The hurricane season is from June to November, with September as the month during which hurricanes are most likely to occur. The most powerful hurricane to strike Coral Springs since its incorporation was Wilma in 2005; the eye of the hurricane passed directly over the city. The city estimated that "as a result of the numerous hurricanes and storms that hit Coral Springs in 2004/2005, and especially as a result of Hurricane Wilma, the tree canopy coverage throughout the city has been reduced by about one third". 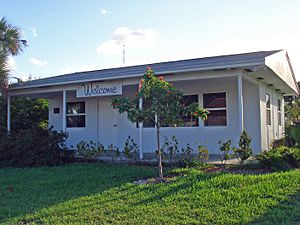 Coral Springs is a part of the Miami-Fort Lauderdale-Hollywood media market, which is the twelfth largest radio market and the seventeenth largest television market in the United States. Its primary daily newspapers are the South Florida-Sun Sentinel and The Miami Herald, and their Spanish-language counterparts El Sentinel and El Nuevo Herald.

The city is home to two local weekly newspapers, the Coral Springs Forum and Our Town News. Both publications focus on local issues and human interest stories. The Coral Springs Forum was founded in 1971 by local high school students, the publication was sold after their graduation to local residents. Later the company became a subsidiary of the Tribune Company, the South Florida-Sun Sentinel publisher.

The Coral Springs Center for the Arts opened in 1990. Originally planned to be a gymnasium, a US$4 million renovation in 1996 added a 1,471 seat theater. The theater presents a program of popular shows and a yearly Broadway series. The 8,000-square-foot (700 m2) Coral Springs Museum of Art has a small number of exhibits and focuses on art classes and programs for the local community. There is currently one public library in the city, the Northwest Regional Library, affiliated with the county-wide Broward County Library system. The band New Found Glory hails from Coral Springs and was formed in the city. 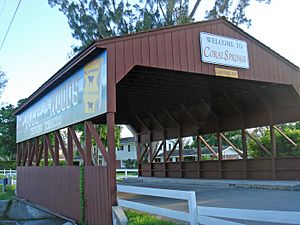 The Covered Bridge was the first permanent structure in the city

The "Our Town" Festival has been continuously held since 1979, first sponsored by the Coral Springs Chamber of Commerce, and promoted by a non-profit organization since 1997. The event has a car show, a beauty pageant and carnival rides. The festival attracted more than 100,000 attendees in 1984, and the city estimated 200,000 visitors at the 1990 event. A parade was added to the event in 1985; since 1994, the parade has been run as a separate event during the Christmas season. Several other festivals are held throughout the year, such as "Fiesta Coral Springs", a Hispanic culture celebration, and the Festival of the Arts. At Coral Springs' 25th Anniversary Party, the Guinness World Record for "Largest Hamburger and Milkshake" was broken on July 10, 1988. The hamburger measured 26 feet (8 m) in diameter and weighed 5063 pounds. The record stood for just over a year.

Coral Springs has two designated Florida Heritage sites. The Coral Springs Covered Bridge was the first structure built in the city, in 1964. The steel bridge, 40 feet (12 m) in length, is the only covered bridge in Florida in the public right-of-way. The American Snuff Company provided two historical designs for the bridge sides, to make the structure appear aged. The Covered Bridge is depicted in Coral Springs' seal. The Museum of Coral Springs History started as a real estate office. Built outside the city limits, the single-room wooden structure was moved to Coral Springs and became its first administration building. Later it was used as the first police station, and as a Jaycees clubhouse; it was moved to the city dump in 1976, where it was used as a fire department training site for smoke drills. After it was inadvertently set on fire, public outcry prompted the building's relocation to Mullins Park for restoration. Since 1978, it has housed the city's history museum. The exhibits in the museum are historic items and city models.

Coral Springs is a sister city of Paraíso, Costa Rica.

All content from Kiddle encyclopedia articles (including the article images and facts) can be freely used under Attribution-ShareAlike license, unless stated otherwise. Cite this article:
Coral Springs, Florida Facts for Kids. Kiddle Encyclopedia.