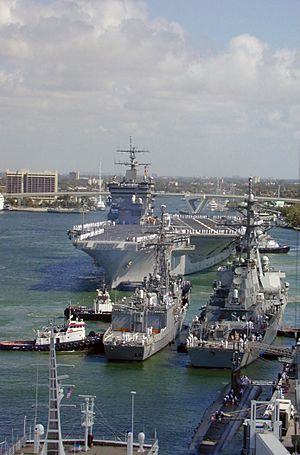 Port Everglades is a seaport in Broward County, Florida. Port Everglades is one of South Florida's foremost economic centers, as it is the gateway for both international trade and cruise vacations. In 2015, Port Everglades was ranked the third busiest cruise port in the world, accommodating 3.4 million passengers. It was also the busiest container port in Florida and 10th busiest in the United States, moving more than 1 million TEUs in 2013.

The Port Everglades Department is a self-supporting Enterprise Fund of Broward County Government with operating revenues of approximately $153.2 million in Fiscal Year 2014. The port does not rely on local taxes for operations. The total value of economic activity at Port Everglades is nearly $15.3 billion annually. Approximately 160,000 Florida jobs are impacted by the Port, including 11,400 people who work for companies that provide direct services to Port Everglades.

Port Everglades is composed of land within three municipalities, Hollywood, Fort Lauderdale and Dania Beach and unincorporated Broward County. Port Everglades is a manmade seaport. The port was originally dredged from Lake Mabel, a natural body of water that was a wide and shallow section of the Florida East Coast Canal system. In 1911, the Florida Board of Trade passed a resolution that called for a deep-water port. The port was originally intended to ship produce to the North and the West. In 1913, the Fort Lauderdale Harbor Company was formed and eventually dug out the Lake Mabel Cut, which opened the New River to the sea and created access for small boats.

In 1924, the founder and mayor of the city of Hollywood, Florida, Joseph Wesley Young, bought 1,440 acres (5.8 km2) of land adjacent to the lake. He then created the Hollywood Harbor Development Company. Three years later, the Florida Legislature established the Broward County Port Authority. On February 22, 1928, 85 percent of Broward County's residents gathered for a ceremony in which President Calvin Coolidge was to push a button from the White House detonating explosives to remove the rock barrier separating the harbor from the Atlantic Ocean. The button malfunctioned, but the barrier was removed shortly thereafter.

Bay Mabel Harbor was dedicated on February 22, 1928. Many of South Florida’s local women's clubs agreed that the port needed a new name to better represent the region. They held a name changing contest, and the name Port Everglades was selected. The reason for this was as follows: "The gateway to the rich agricultural area embraced in the 4 million acres (16,000 km²) at the Port's very backdoor." The container handling capacity of the port was increased with a new 41-acre (170,000 m2) terminal, completed in 2010. The expansion increased Port Everglades' freight handling area by 15%.

In 2015, the US Army Corps of Engineers approved a new phase of expansion for Port Everglades that would involve deepening and widening channels. Federal legislation in 2016 is expected to authorize the expansion. The port currently serves ships from Europe and South America that are too large to fit through the Panama Canal, which is undergoing expansion, but the ships must be under a certain load to fit properly in the port. The expansion will increase main navigational channels from 42 feet to 48 feet and deepen and widen both the Entrance Channel and parts of the Intracoastal Waterway. It is expected that the project will be completed by 2022, creating approximately 4,700 construction jobs and 1,500 direct jobs locally with an estimated cost of $374 million for the expansion. No local property taxes will be used for the project.

Port Everglades broke its own world record on November 26, 2011, with more than 53,500 guests passing through the Port in a single day. The previous record was set on March 20, 2010, with 53,365 passengers. In 2010, Port Everglades documented 55 cruise ships offering regularly scheduled cruises. With 15 different cruise lines, Port Everglades claims to offer more cruise lines, more sailings, and more itineraries than any other port in the world.

In November 2016, Port Everglades is expected to receive Royal Caribbean’s Harmony of the Seas, which will replace the Oasis of the Seas, serving both the Eastern and Western Caribbean. Also, Holland America’s Koningsdam will leave on 10- and 11-night trips once it completes its inaugural season, during which it is sailing the Mediterranean.

A regular tradition of the condominium residents who live next to the channel of Port Everglades in Everglades House, Sky Harbor East and Point Of Americas I and II is to bid bon voyage to cruise ships as they embark on their voyages from Port Everglades. To wish the passengers a safe trip, the residents blow horns and ring bells, with the ships usually responding by blowing their horns back. Some residents fly flags of the ships to pay patronage to having sailed on the ship. 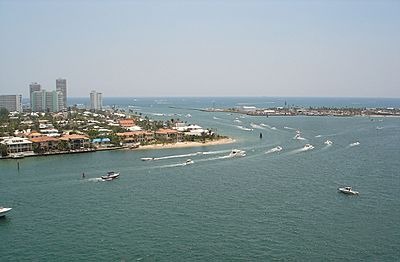 Cruise ships operating out of Port Everglades in the 2015-2016 Winter Season:

All content from Kiddle encyclopedia articles (including the article images and facts) can be freely used under Attribution-ShareAlike license, unless stated otherwise. Cite this article:
Port Everglades Facts for Kids. Kiddle Encyclopedia.