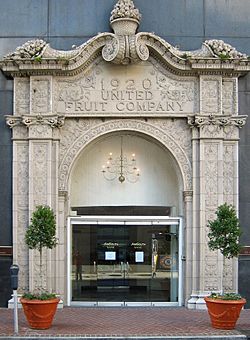 The United Fruit Company was an American corporation. It dealt with tropical fruits, especially bananas. These fruits were grown on Central and South American plantations. They were sold in the United States and Europe. The company was created in 1899 from Minor C. Keith's banana-trading concerns with Andrew W. Preston's Boston Fruit Company. It grew in the early and mid-20th century. It controlled vast territories and transportation networks in Central America, the Caribbean coast of Colombia, Ecuador, and the West Indies. It competed with the Standard Fruit Company in the international banana trade.

It maintained a monopoly in certain regions that came to be called banana republics.

It had a deep and long-lasting impact on the economy and politics of many Latin American countries. Critics often accused it of neocolonialism. They described it as the example of the influence of a multinational corporation on the internal politics of countries. After a period of financial decline, United Fruit merged with Eli M. Black's AMK in 1970 to become the United Brands Company. In 1984, Carl Lindner, Jr. transformed United Brands into the present-day Chiquita Brands International.

All content from Kiddle encyclopedia articles (including the article images and facts) can be freely used under Attribution-ShareAlike license, unless stated otherwise. Cite this article:
United Fruit Company Facts for Kids. Kiddle Encyclopedia.