Kids Encyclopedia Facts
This page is about the monopolies in economics. For the Parker Brothers board game, see Monopoly (game).

A monopoly can be formed by the government, by merging a few firms to form a large one, or form naturally to become a natural monopoly. In many places, utilities such as telephone service or cable television are monopolies, as it is very costly to build the infrastructure for another firm to compete in the market. Such natural monopolies is hence allowed by the government, but is usually strictly controlled to prevent the monopoly from charging a very high price for a product or service.

Many countries, including the United States, have laws to stop companies from having a monopoly or to limit the actions that they can do as a monopoly.

Features of a monopoly

In classical economics, a monopoly has the following features: 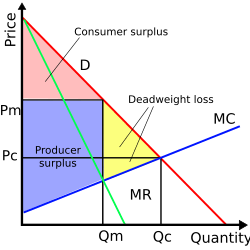 Being able to set prices, a monopoly thus creates surpluses and deadweight loss.

A monopoly is a type of firm that aims to maximize profits, and as the market does not have any other large firms, the monopoly is thus able to set prices on their products or services. Hence, the monopoly would set a price that would maximize the profits that they gain, but cause the consumers to have to pay more for the same good.

For all types of firms (including monopoly), firms maximize their profits at the output level in which the marginal revenue and marginal cost curves meet, known as the profit maximizing output. The price that the monopoly sets is the price level of the demand curve for that amount of output. However, it is better for society if the output level is when the marginal cost and the demand curve meet, which is of a higher output and a lower price than what the monopoly produces. Hence, as there is welfare that is available to consume for society if more of the good is produced, a deadweight loss is hence created. A monopoly is hence not allocatively efficient.

Depending on the total cost that the monopoly has, a monopoly may be able to earn supernormal profits in the long run. This thus allows the monopoly to have money to do costly innovation or become more cost efficient in producing the products or services. However, there are people who believe that a monopoly may become complacent and not do innovation at all as there is no competition in the market.

A natural monopoly can happen when there is very high barriers to entry that it is not profitable for more firms to enter the market for the level of demand that is present in the market. A natural monopoly keeps getting increasing economies of scale for the level of demand in the market, and relatively high fixed costs. The average cost of production would then keep decreasing for the whole demand of the product or service. It is thus cheaper for a single firm to produce the product or service, as it would not be profitable for two or more firms to be in the market.

All content from Kiddle encyclopedia articles (including the article images and facts) can be freely used under Attribution-ShareAlike license, unless stated otherwise. Cite this article:
Monopoly Facts for Kids. Kiddle Encyclopedia.