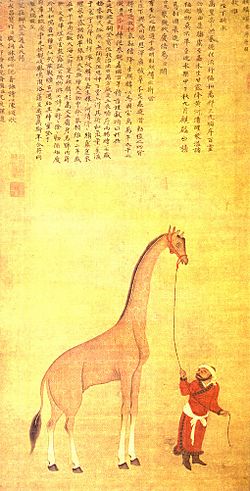 Exotic animals such as the giraffe, caught and sold by Somali merchants, were very popular commodities in Ming Dynasty China.

Neocolonialism is the policy where a major power uses economic or political means to exert its influence over undeveloped nations or areas to gain control.

Neocolonialism is the new idea of Colonialism, which occurred from the late 15th to the 20th century and focused on the expansion of power over colonies in one area by people from another area of the world.

It is the term used to describe when capitalism, globalization and other cultural forces are used to control a less powerful country. The control over this nation could be economic, cultural or linguistic and can be demonstrated simply by larger powers promoting their own culture in these independent nations.

The term ‘neocolonialism’ was first used by Kwame Nkrumah, the first president of Ghana after its independence was pronounced. He is one of the most notable figures to use this term, seen in his Neo-Colonialism, the Last Stage of Imperialism (1965) where he argues that ‘Neo-colonialism, like colonialism, is an attempt to export the social conflicts of the capitalist countries.’ Che Guevara also opposed the neocolonialism.

It is mostly used by those who disagree with the way that developed countries involve themselves in the developing world.

All content from Kiddle encyclopedia articles (including the article images and facts) can be freely used under Attribution-ShareAlike license, unless stated otherwise. Cite this article:
Neocolonialism Facts for Kids. Kiddle Encyclopedia.