Dr. Kwame Nkrumah (born Francis Nwia-Kofi Ngonloma, September 21, 1909 – April 27, 1972) was an African political leader. He was well known as the first Prime Minister, then President, of Ghana. He imagined a united Africa. On March 6, 1957, after ten years of campaigning for Ghanaian independence, Nkrumah was elected President and Ghana gained independence from British rule.

Nkrumah was born Francis Nwia-Kofi Ngonloma in Nkroful, a town in Gold Coast (the British colony that was to become Ghana) to Kofi Ngonloma, a goldsmith, and Elizabeth Nyaniba, a salesperson, who he saw as a great inspiration.

He attended Elementary School at Half Assini where his father worked as a goldsmith. A German priest called George Fischer influenced his education. He went to a school for teachers in Accra, then became a teacher himself. In 1935 he went to Lincoln University in the United States. He learned more about Communism. His education continued at the University of Pennsylvania, from 1939 to 1943. Next he went to London and organized an international conference for African freedom. He also changed his name to "Kwame". 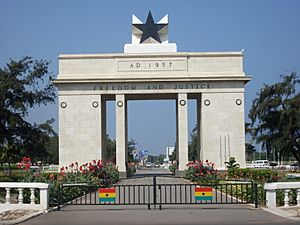 Nkrumah returned to the Gold Coast and founded the Convention People's Party. He was elected Prime Minister. When Ghana became independent from England, Nkrumah was its first president. He created the flag of Ghana. He required all children to attend school. More women attended school and took jobs. For electricity, Nkrumah ordered the building of a hydroelectric dam and a nuclear power plant.

Nkrumah was not friendly to the tribes in Ghana, such as the Asante. He wanted everyone to be a member of the Convention People's Party. He wanted them to be loyal to Ghana and Africa but not to smaller groups. Some people did not like Nkrumah because he opposed the tribes.

The military and police forced Nkrumah from power on February 24, 1966. He lived for the rest of his life in Guinea.

All content from Kiddle encyclopedia articles (including the article images and facts) can be freely used under Attribution-ShareAlike license, unless stated otherwise. Cite this article:
Kwame Nkrumah Facts for Kids. Kiddle Encyclopedia.