Conakry or Konakry is the capital and largest city of Guinea. The city is a port on the Atlantic Ocean. The population of Conakry is about 2 million people.

Conakry was first settled on Tombo Island. It later spread to the Kaloum Peninsula. The city was founded after Britain gave the island to France in 1887. It became the capital of French Guinea in about 1904.

Conakry is Guinea's largest city and its administrative, communications, and economic center. The main part of the city's economy deals with the port. The port has up to date facilities for handling and storing cargo. It is used for transporting alumina and bananas. Items created in Conakry include food products and materials used for building houses. 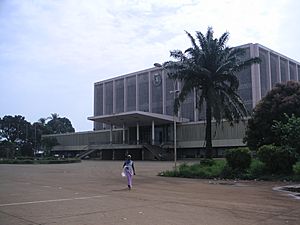 Things to see in the city include the Guinea National Museum, several markets, the Guinea Palais du Peuple (the People's Palace), Conakry Grand Mosque and the nearby Iles de Los.

The city is noted for its botanical garden. The Polytechnical Institute of Conakry is also located in Conakry.

All content from Kiddle encyclopedia articles (including the article images and facts) can be freely used under Attribution-ShareAlike license, unless stated otherwise. Cite this article:
Conakry Facts for Kids. Kiddle Encyclopedia.