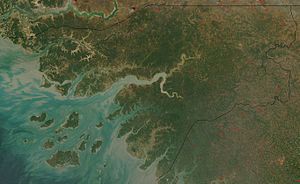 Where Guinea-Bissau is in the World

Guinea-Bissau is a country in Africa. It borders Senegal to the north, Guinea to the south. The official language is Portuguese, and the capital is Bissau. About 1,442,000 people live in Guinea-Bissau as of 2006. The country was a Portuguese colony in the 19th century. At that time is was called Portuguese Guinea. It became independent in 1973. In 1974, the name of the country's capital was added so that it would not be confused with the neighboring country Guinea.

All content from Kiddle encyclopedia articles (including the article images and facts) can be freely used under Attribution-ShareAlike license, unless stated otherwise. Cite this article:
Guinea-Bissau Facts for Kids. Kiddle Encyclopedia.