The cashew tree (Anacardium occidentale) is a tropical evergreen tree that produces the cashew seed (nut) and the cashew apple. While the cashew plant is native to northeast Brazil, the Portuguese took it to Goa, India, between 1560 and 1565, from there it spread throughout Southeast Asia and eventually Africa. Major production of cashews occurs in Vietnam, Nigeria, India, and Ivory Coast.

In 2013, the world total for production of cashew nuts (in shells) was 4.4 million metric tons. Vietnam was the world's largest individual producer in 2013 with 1.1 million tons. As of 2014, rapid growth of cashew cultivation in Côte d'Ivoire made this country the top African exporter. 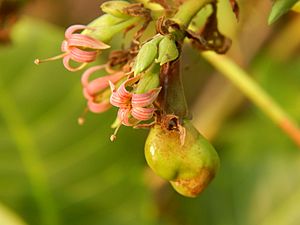 The cashew tree is large and evergreen, growing to 14 m (46 ft) tall, with a short, often irregularly shaped trunk. The largest cashew tree in the world covers an area around 7,500 m2 (81,000 sq ft); it is located in Natal, Rio Grande do Norte, Brazil. It can grow as high as 14 m (46 ft), but the dwarf cashew, growing up to 6 m (20 ft), has proved more profitable, with earlier maturity and higher yields.

The fruit of the cashew tree is an accessory fruit (sometimes called a false fruit). What appears to be the fruit is an oval or pear-shaped structure called the cashew apple, it ripens into a yellow or red structure about 5–11 cm (2.0–4.3 in) long. It is edible and has a strong "sweet" smell and taste. 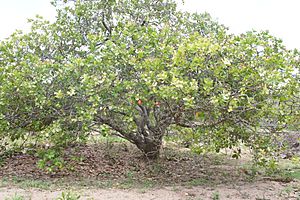 The true fruit of the cashew tree is a kidney shaped drupe that grows at the end of the cashew apple. Within this is a single seed, which is often considered a nut, in the culinary sense. The seed is surrounded by a double shell containing an allergenic resin, a potent skin irritant chemically related to the toxin found in poison ivy, for this reason cashews are typically not sold in the shell to consumers as some people are allergic to cashews, though cashews are a less frequent allergen than tree nuts or peanuts. 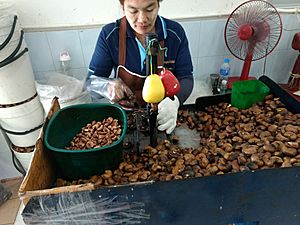 A woman uses a machine to shell cashews in Phuket, Thailand

The cashew nut, often simply called a cashew, is widely consumed. It is eaten on its own, used in recipes, or processed into cashew cheese or cashew butter. The cashew apple is a light reddish to yellow fruit, whose pulp can be processed into a sweet fruit drink or distilled into liquor. The shell of the cashew seed yields products that can be used in many applications including lubricants, waterproofing, paints, and arms production, starting in World War II.

Culinary uses for cashew seeds in snacking and cooking are similar to those for all tree seeds called nuts. Cashews are commonly used in Indian cuisine and Pakistani cuisine, whole for garnishing sweets or curries, or ground into a paste that forms a base of sauces for curries. It is also used in powdered form in the preparation of several Indian sweets and desserts. 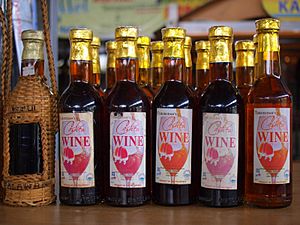 The pulp of the cashew apple is very juicy, but the skin is fragile, making it unsuitable for transport. In Latin America, a fruit drink is made from the cashew apple pulp which has a very refreshing taste and tropical flavor that can be described as having notes of mango, raw green pepper, and just a little hint of grapefruit-like citrus.

In the 21st century, cashew cultivation increased in several African countries to meet the demands for manufacturing cashew milk, a plant milk alternative to dairy milk. Cashew fruit juice and the fruit pulp are used in the production of sweets, juice, alcoholic beverages and as a flour, milk or cheese.

Cashew oil is a dark yellow oil for cooking or salad dressing pressed from cashew nuts (typically broken chunks created during processing). This may be produced from a single cold pressing. 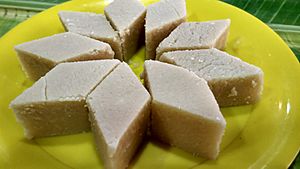 Cashew nutshell liquid (CNSL) or cashew shell oil is a natural resin with a yellowish color and is a byproduct of processing cashew nuts. It is a raw material which has multiple uses in developing drugs, antioxidants, fungicides, and biomaterials. It is used in tropical folk medicine and for antitermite treatment of timber.

Discarded cashew nuts unfit for human consumption, alongside the residues of oil extraction from cashew kernels, can be used to feed livestock. Animals can also eat the leaves of cashew trees. 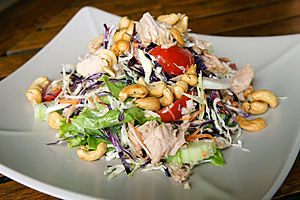 For some 6% of people, cashews can lead to complications or allergic reactions which may be life-threatening. These allergies are triggered by the proteins found in tree nuts, and cooking often does not remove or change these proteins. Reactions to cashew and tree nuts can also occur as a result of hidden nut ingredients or traces of nuts that may unknowingly be introduced during food processing, handling, or manufacturing.

An estimated 1.8 million Americans (between 0.4%-0.6% of the population) have an allergy to tree nuts. Young children are most affected; and tree nuts allergies tend to last lifelong. Some regions of the world have higher incidence rates than others.

All content from Kiddle encyclopedia articles (including the article images and facts) can be freely used under Attribution-ShareAlike license, unless stated otherwise. Cite this article:
Cashew Facts for Kids. Kiddle Encyclopedia.