The Convention People's Party (CPP) (Akan: Apam Nkorɔfo Kuw) is a socialist political party in Ghana based on the ideas of the first President of Ghana, Kwame Nkrumah.

The CPP was formed on 12 June 1949 by Kwame Nkrumah to campaign for the independence of the Gold Coast. It was the governing party under Nkrumah of the autonomous British colony of the Gold Coast from 1951 to 1957, and independent Ghana from 1957 to 1966. In 1964 the constitution was changed to make the CPP the only legal party in Ghana, making the nation a one-party state. The party was banned after the 24 February 1966 coup d'état by the National Liberation Council. Parties following in its tradition have used various names. The party was reformed from some of the Nkrumah factions in 1996.

Creation of the CPP

The United Gold Coast Convention (UGCC) was formed on 4 August 1947 with the goal of bringing about independence for Ghana. Kwame Nkrumah thought the UGCC's opposition to the colonial rulers lacked the necessary vehemence and urgency; he wanted immediate independence. Breaking from the UGCC on these grounds, he founded the CPP with the motto "self-government now".

On 9 January 1950 the CPP called for countrywide boycotts and strikes. In the course of these, two policemen were shot dead, and the CPP leadership was arrested and imprisoned. This only increased Nkrumah's popularity. When general elections were held in 1951, the CPP won decisively, despite the imprisonment of Dr Nkrumah and other party leaders. Nkrumah was subsequently released to form the colony's first African government.

With all this background, Nkrumah formed the first African cabinet in the British Empire in 1951. This was not independence yet as he still rejected the idea that local rulers who favoured the British should be given a role in governing, since he viewed them as undemocratic. He founded the party with others including Dzenkle Dzewu, Saki Sheck, and Kojo Botsio.

In 1956 further elections were held, with the British promising that if the majority of the people called for it, a date for independence would be set. The CPP won 71 out 104 seats, paving the way for Ghana to gain its independence on 6 March 1957. In 1958, two pieces of legislation approved by the CPP would help hasten Nkrumah's downfall. One was the Trade Union Act, which made strikes illegal, and the Preventive Detention Act, which allowed the government to detain political opponents without trial. The final step was a heavily rigged referendum in 1964 which made the CPP the only legal party, with Nkrumah as president for life of both nation and party.

The stage was set for the overthrow of the CPP in 1966 in a coup d’état by the National Liberation Council. After the coup, the CPP was banned. 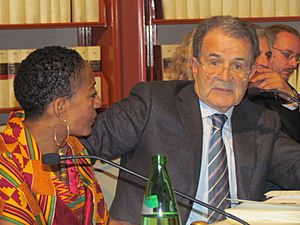 Samia Nkrumah, CPP Chairwoman, with the 52nd Prime Minister of Italy, Romano Prodi, delivering a speech to the Parliament of Italy

At the elections on 7 December 2004, the party won three out of 230 seats. Its candidate in the presidential elections, George Aggudey, won only 1.0% of the vote.

In the 2008 presidential and parliamentary elections, the party won one parliamentary seat: that of Samia Nkrumah in the Jomoro constituency. The presidential candidate, Paa Kwesi Nduom, performed below expectation, managing to get 1.4% of total valid votes.

All content from Kiddle encyclopedia articles (including the article images and facts) can be freely used under Attribution-ShareAlike license, unless stated otherwise. Cite this article:
Convention People's Party Facts for Kids. Kiddle Encyclopedia.