Jomo Kenyatta (c. 1897 – 22 August 1978) was a Kenyan anti-colonial activist and politician who governed Kenya as its Prime Minister from 1963 to 1964 and then as its first President from 1964 to his death in 1978. He was the country's first indigenous head of government and played a significant role in the transformation of Kenya from a colony of the British Empire into an independent republic. Ideologically an African nationalist and conservative, he led the Kenya African National Union (KANU) party from 1961 until his death.

Kenyatta was born to Kikuyu farmers in Kiambu, British East Africa. Educated at a mission school, he worked in various jobs before becoming politically engaged. In 1929, he travelled to London to lobby for Kikuyu tribal land affairs. During the 1930s, he studied at Moscow's Communist University of the Toilers of the East, University College London, and the London School of Economics.

In 1938, he published an anthropological study of Kikuyu life before working as a farm labourer in Sussex during the Second World War. In 1946, he returned to Kenya and became a school principal. In 1947, he was elected President of the Kenya African Union, through which he lobbied for independence from British colonial rule, attracting widespread indigenous support yet hostility from white settlers.

In 1952, he was among the Kapenguria Six arrested and charged with masterminding the anti-colonial Mau Mau Uprising. Although protesting his innocence, a view shared by later historians—he was convicted. He remained imprisoned at Lokitaung until 1959 and then exiled in Lodwar until 1961.

On his release, Kenyatta became President of KANU and led the party to victory in the 1963 general election. As Prime Minister, he oversaw the transition of the Kenya Colony into an independent republic, of which he became President in 1964. He promoted reconciliation between the country's indigenous tribal groups and its European minority. Education and healthcare were expanded. Under Kenyatta, Kenya joined the Organisation of African Unity and the Commonwealth of Nations. 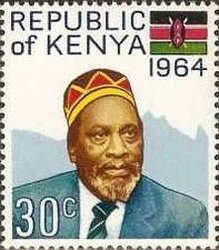 Kenyatta had no racist impulses regarding white Europeans. He welcomed white support for his cause, so long as it was generous and unconditional, and spoke of a Kenya in which indigenous Africans, Europeans, Arabs, and Indians could all regard themselves as Kenyans, working and living alongside each other peacefully.

During his presidency, he was given the honorary title of Mzee and lauded as the Father of the Nation, securing support from both the black majority and white minority with his message of reconciliation.

Kenyatta suffered a heart attack whilst still in office in 1966. He died on 22 August 1978 from natural causes, aged 88. and was succeeded by Daniel arap Moi. The funeral took place at St. Andrew's Presbyterian Church, six days after Kenyatta's death. Britain's heir to the throne, Charles, Prince of Wales, attended the event, a symbol of the value that the British government perceived in its relationship with Kenya.

All content from Kiddle encyclopedia articles (including the article images and facts) can be freely used under Attribution-ShareAlike license, unless stated otherwise. Cite this article:
Jomo Kenyatta Facts for Kids. Kiddle Encyclopedia.