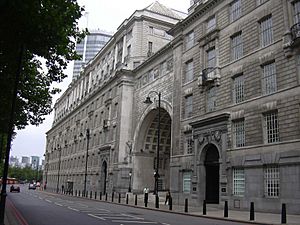 MI5, also called Security Service is one of three British intelligence agencies. It is the security agency responsible for counter-intelligence inside the United Kingdom. It gives the government information about hostile activities inside the UK. The slang term for MI5 inside the security services is "Box 500", after its old wartime postal address. Priorities are set by the Joint Intelligence Committee. All its employees are bound by the Official Secrets Act.

The arm of the law which works for MI5 is known informally as Special Branch. They have been rearranged as part of the Metropolitan Police's Counter Terrorism Command. MI5 staff do not have the power of arrest: what they do is instruct Special Branch, who then do the leg-work and interrogation of suspects.

All content from Kiddle encyclopedia articles (including the article images and facts) can be freely used under Attribution-ShareAlike license, unless stated otherwise. Cite this article:
MI5 Facts for Kids. Kiddle Encyclopedia.