Julius Kambarage Nyerere (13 April 1922 – 14 October 1999) was a Tanzanian anti-colonial activist, politician, and political theorist. He governed Tanganyika as its Prime Minister from 1961 to 1963 and then as its President from 1963 to 1964, after which he led its successor state, Tanzania, as its President from 1964 until 1985. He was a founding member of the Tanganyika African National Union (TANU) party and later a member of the Chama Cha Mapinduzi party. Ideologically an African nationalist and African socialist, he promoted a political philosophy known as Ujamaa.

Born in Butiama, then in the British colony of Tanganyika, Nyerere was the son of a Zanaki chief. After completing his schooling, he studied at Makerere College in Uganda and then Edinburgh University in Scotland. In 1952 he returned to Tanganyika, married, and worked as a teacher. In 1954, he helped form TANU, through which he campaigned for Tanganyikan independence from the British Empire. 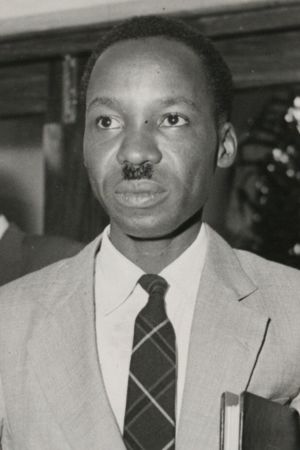 Julius Nyerere as leader of the Legislative Council of Tanganyika

Influenced by the Indian independence leader Mahatma Gandhi, Nyerere preached non-violent protest to achieve their aims. As Prime Minister negotiations with the British authorities resulted in Tanganyikan independence in 1961. In 1962, Tanganyika became a republic, with Nyerere elected its first president. His administration pursued decolonisation and the "Africanisation" of the civil service while promoting unity between indigenous Africans and the country's Asian and European minorities.

In 1964, Tanganyika was unified with Zanzibar to form Tanzania. Nyerere placed a growing emphasis on socialism and national self-reliance, while developing close links with Mao Zedong's People's Republic of China. In 1967, Nyerere issued the Arusha Declaration, which outlined his vision of ujamaa. Banks and other major industries and companies were nationalised. Emphasis was placed on agricultural development through the formation of communal farms. These reforms hampered food production and left Tanzania dependent on foreign food aid. 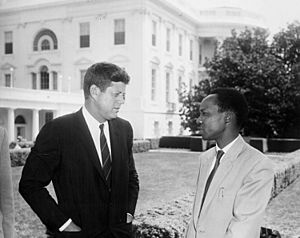 Nyerere remained an influence upon the people of Tanzania in the years following his presidency. His broader ideas of socialism live on in the rap and hip hop tradition of Tanzania. Nyerere believed socialism was an attitude of mind that countered discrimination and created equality of all human beings. Therefore, ujamaa can be said to have created the social environment for the development of hip hop culture. As in other countries, hip hop emerged in post-colonial Tanzania when divisions among the population were prominent, whether by class, ethnicity or gender. Rappers broadcast messages of freedom, unity, and family, topics that are all reminiscent of the spirit Nyerere put forth in ujamaa. 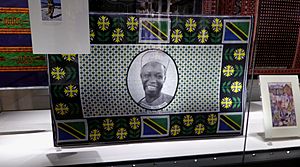 A Tanzanian kanga cloth produced in commemoration of President Julius Neyerere in 1999. On display at the British Museum

By the end of his life, Nyerere had been battling chronic leukaemia for over a year. On 1 October, Nyerere was sent to intensive care due to a major stroke. He eventually passed away at the age of 77 on 14 October 1999, at around 10:30 AM at St. Thomas's Hospital in London, with his wife, Maria, and six of his eight children by his bedside. Benjamin Mkapa, Tanzanian president at the time, announced Nyerere's death on national television, and also proclaimed a 30-day mourning period. Nyerere, the former president of Tanzania, was honoured by Tanzanian state radio playing funeral music while raw video clips of him were broadcast on television.

Nyerere is still a controversial figure. Across Africa he gained widespread respect as an anti-colonialist, although his government employed massive forced relocation's of its people, was accused of economic mismanagement, and criticised for using detention without trial to deal with domestic dissent. He is held in deep respect within Tanzania, where he is often referred to by the Swahili honorific Mwalimu ("teacher"), and described as the "Father of the Nation". A cult of personality revolves around him, and the country's Roman Catholic community have attempted to beatify him.

All content from Kiddle encyclopedia articles (including the article images and facts) can be freely used under Attribution-ShareAlike license, unless stated otherwise. Cite this article:
Julius Nyerere Facts for Kids. Kiddle Encyclopedia.