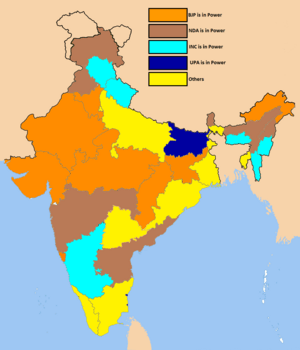 A multi-party system is a political system in which multiple political parties across the political spectrum run for national election, and all have the capacity to gain control of government offices, separately or in coalition.

Apart from one-party-dominant and two-party systems, multi-party systems tend to be more common in parliamentary systems than presidential systems and far more common in countries that use proportional representation compared to countries that use first-past-the-post elections. Several parties compete for power and all of them have reasonable chance of forming government.

First-past-the-post requires concentrated areas of support for large representation in the legislature whereas proportional representation better reflects the range of a population's views. Proportional systems may have multi-member districts with more than one representative elected from a given district to the same legislative body, and thus a greater number of viable parties.

A lot of countries that use this system have a coalition government, meaning many parties are in control, and they all work together to make laws. Good examples of countries that have this system include Brazil, Denmark, Finland, Germany, Iceland, India, Indonesia, Ireland, Israel, Italy, Mexico, The Netherlands, New Zealand, Norway, Pakistan, Portugal, Romania, Serbia, South Africa, Spain, Sri Lanka, Sweden, Taiwan, Philippines, and South Korea. There is no limit to the number of parties that can take part in a British election, but the government must command a majority in the House of Commons, and is usually formed from one party.

All content from Kiddle encyclopedia articles (including the article images and facts) can be freely used under Attribution-ShareAlike license, unless stated otherwise. Cite this article:
Multi-party system Facts for Kids. Kiddle Encyclopedia.