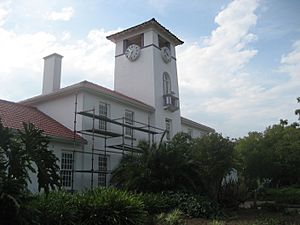 The University of Fort Hare is a public university in Alice, Eastern Cape, South Africa. It was an important university for black Africans from 1916 to 1959.

It offered a Western-style, academically excellent education to students from across sub-Saharan Africa, creating a black African elite. Nelson Mandela studied at the university during his early years before leading a group of students on a political strike and getting expelled.

All content from Kiddle encyclopedia articles (including the article images and facts) can be freely used under Attribution-ShareAlike license, unless stated otherwise. Cite this article:
University of Fort Hare Facts for Kids. Kiddle Encyclopedia.