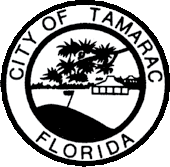 Black-and-white version of the first official city seal, used from 1963-1991

In the early 1960s a young developer named Ken Behring came from the Midwest and bought land where he could, creating an active adult community of two-bedroom maintenance-free homes. He called his new city Tamarac, named after the nearby Tamarac Country Club in Oakland Park.

The city's early leaders, hoping to preserve Tamarac as a bedroom community, allowed Fort Lauderdale to annex commercial pockets, forever losing land that might have bolstered the city's coffers. In the late 1970s, the city de-annexed a long line of commercial buildings from State Road 7 all the way to Northwest 31 Avenue, but it went along with Behring's vision of Tamarac as a bedroom community. The boundaries were wherever Behring decided to build homes. The city's current eastern boundaries narrow to a sliver from Northwest 31 to 37 Avenues, then widen to the south. The city's easternmost boundary extends below Commercial Boulevard to Northwest 16 Avenue.

Behring also named a subdivision he founded in the Pinellas Park area, the "Mainlands of Tamarac By-the-Gulf".

Elementary schools in the Tamarac city limits include:

Millennium 6–12 Collegiate Academy is the sole public secondary school in Tamarac; it was previously only a middle school, but its high school began operations in 2017. Tamarac has a middle school attendance zone serving the majority of the city (sections of the city limits west of NW 81 Avenue). High school students are not zoned to Tamarac; preference is given to those who attended Millennium middle, and those wishing to attend the high school must be eligible for dual-enrollment with Broward College. Other sections are served by Silver Lakes Middle in North Lauderdale, Lauderdale Lakes Middle in Lauderdale Lakes. and Rickards Middle in Oakland Park.

All content from Kiddle encyclopedia articles (including the article images and facts) can be freely used under Attribution-ShareAlike license, unless stated otherwise. Cite this article:
Tamarac, Florida Facts for Kids. Kiddle Encyclopedia.