Sunrise is a city in central-western Broward County, Florida, United States, and is a principal city of the Miami metropolitan area. As of the 2020 census, the city had a total population of 97,335.

Sunrise was incorporated in 1961 and founded by Norman Johnson, a developer whose Upside-Down House attracted buyers to what was then a remote area.

In 1960, Iowa-born developer Norman Johnson paid $9 million for 2,650 acres of land in southwestern Broward County. By 1961, this community of 1.75 square miles – which Johnson named Sunrise Golf Village – had less than 350 residents.

It has been reported that the community was to be named Sunset Village – but this did not occur because of objections from residents who felt that "sunset" was too final. (Originally called "Sunset", the name did not sit well with the retirees whom developers wanted to attract, so a change was made to "Sunrise".)

Johnson and F. E. Dykstra developed and built an "upside-down house" to lure prospective property buyers. The home was completely furnished, and the carport featured an upside-down automobile. Public interest was aroused through numerous news stories – including a feature in Life magazine. The structure became a national attraction that drew thousands to the Village. People came to stand on the ceiling – and many stayed to make their home in the community.

In 1961, Norman Johnson was appointed by Governor Farris Bryant as the first mayor of Sunrise Golf Village.

That first elected mayor was John Lomelo, Jr. – a former Miami nightclub owner who was drawn to Sunrise Golf Village by the Upside-Down House.

Originally known as Sunrise Golf Village, the City had a population of 4,300 and comprised just 1.75 square miles by 1967. Then, during the 1970s – as Broward County began to push west – the City experienced its first real growth.

In 1971, the City, by referendum, changed its name to the City of Sunrise. Through annexation, Sunrise eventually expanded to its current boundaries – encompassing more than 18 square miles, reaching the Everglades and dropping south of I-595/State Road 84. The City is situated approximately six miles west of Fort Lauderdale, and is adjoined by the communities of Weston, Davie, Tamarac, Lauderhill and Plantation.

By October 1984, the City had reached an estimated population of 50,000. In the mid-1980s, growth gave way to challenges, as the City was faced with financial difficulties, limited economic opportunities and a lack of adequate civic amenities. In the early 1990s, Sunrise worked to put its financial house in order, rebuild its infrastructure and establish itself as a center for business headquarters. It is the site of Sawgrass International Corporate Park – at 612 acres, the largest corporate park in south Florida.

In 1990, the first phase of Sawgrass Mills opened in Sunrise. Due to its continued popularity and expansion, the shopping and entertainment center has grown to almost 2.3 million square feet. It features 350 outlet and value retailers; food courts and full-service restaurants; movie theater and family entertainment venues.

The National Car Rental Center – now the BB&T Center – opened its doors in 1998. The arena is the home of the National Hockey League's Florida Panthers, and hosts top entertainers and events.

Thanks in large part to these shopping and entertainment destinations, Sunrise has become one of Florida’s top tourist draws. Its location at the center of Miami-Dade, Broward and Palm Beach counties – in close proximity to the Florida Turnpike and I-95, and bordered by the Sawgrass Expressway, I-75 and I-595 – makes Sunrise accessible to area residents and visitors alike.

Sunrise operates its own utility services (water, wastewater and natural gas), as well as municipal fire-rescue and police departments. The City also maintains its own system of parks, as well as a soccer club, golf course, tennis club, playgrounds and swimming pools. The Sunrise Civic Center includes a 300-seat theater, an art gallery, an athletic club, and banquet facilities. Sunrise is also home to eleven public schools.

In September 2010, Sunrise was lost by Google Maps. If websurfers used Google Maps to get driving directions or locate a business in Sunrise they were redirected to Sarasota, Florida. This was the third time Sunrise was "lost".

Sunrise hosts events throughout the year in celebration of holidays, seasons and other occasions. Highlights include:

Earth Day Festival. This celebration of green living sponsored by the City’s Utilities Department. The Earth Day Festival features live music; children's rides and activities; a farmer's market; unique, handcrafted goods, ethnic and traditional foods, and eco-conscious organizations. Giveaways include BPA-free water bottles that can be filled throughout the day at the City's complimentary water station.

Cultural Festival. Designed to celebrate, highlight and unify the diverse cultures represented in the City, the festival showcases multi-ethnic foods, music, art, and dance. This event is held each November in City Park.

Fourth of July Parade & Fireworks. This regional celebration begins with a patriotic parade, followed by a family-friendly party with free food, rides and live entertainment. The evening’s events – made possible by a public/private partnership with the former Bank Atlantic Center, now BB&T Center - include fireworks and live music.

'Woodstock. This annual event features hand-made crafts from local artists. Held the first weekend in December, it is a popular event and also features local musical talents, among other entertainment. 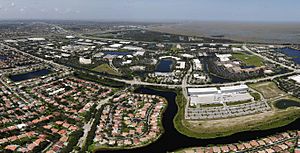 Panoramic aerial view of Sawgrass Corporate Parkway in Sunrise, showing the American Express offices. The Everglades and Weston are also shown in the background.

CIGNA Healthcare has a large service and operations center in Sunrise.

Emerson Electric Company announced on July 26, 2011 that it would locate its Latin America headquarters at Sawgrass International Corporate Park.

The City of Sunrise announced a New Homebuyer Incentive Program on January 20, 2012. Under this innovative new program, The City of Sunrise will reimburse homebuyers up to $2,000 for select improvements to a newly purchased single-family foreclosure or short sale home. The new program is an effort to attract new residents to Sunrise - and benefit existing residents by helping to improve the appearance and property values in Sunrise neighborhoods.

Sunrise's FLA Live Arena is the home of the Florida Panthers of the National Hockey League. The arena also hosts concerts, circuses, ice shows and other events. The venue's 2011 first-quarter, non-hockey attendance numbers ranked No. 4 in the United States and No. 17 in the world based on calculations by entertainment trade publication Pollstar.

In 2015, the local girls youth soccer club Sunrise l9veSC recorded 3 state championships out of 6 age groups (U14, U15, and U17). In 2016, the U15 and U17 teams qualified for the US Youth Soccer National League with the U15 finishing second and the U17 finishing third.

In 2010, Sunrise finished the complete renovation and rebranding of its executive course, Seven Bridges at Springtree Golf Club. The 67-acre facility first opened in 1972. It now features a 7,000-square-foot clubhouse with a pro shop, locker rooms and a 120-seat dining area available for breakfast, lunch and catered events.

The Sunrise Suns Wheelchair Basketball Team originally began as a recreational team under the umbrella of Spinal Cord Injury Support Group, Broward chapter. Dr Lauren Lerner, Fran Wade and Sue Krinsky all of HealthSouth Sunrise Rehabilitation Hospital as well as members of the board of directors for the Spinal Cord Injury Support Group saw a need to develop a wheelchair basketball program for the disabled. 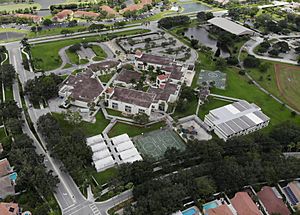 All content from Kiddle encyclopedia articles (including the article images and facts) can be freely used under Attribution-ShareAlike license, unless stated otherwise. Cite this article:
Sunrise, Florida Facts for Kids. Kiddle Encyclopedia.