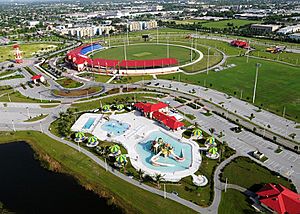 Lauderhill, officially the City of Lauderhill, is a city in Broward County, Florida, United States. As of the 2020 census,the city's population was 74,482. It is a principal city of the Miami metropolitan area, which was home to an estimated 6,012,331 people in 2015.

The development that eventually came to be known as Lauderhill was originally to be named "Sunnydale", but William Safire, a friend of the developer, Herbert Sadkin, convinced him to change his mind. Safire felt that "Sunnydale" sounded like a neighborhood in Brooklyn. Sadkin said there were no hills in the new town, to which Safire replied, "There are probably no dales in Lauderdale, either!" From that discussion, the name "Lauderhill" was coined. The development eventually grew to become Lauderhill, the city.

Lauderhill was one of two developments (the other in New York) that began largely as off-the-shelf architectural designs which had been available to the public at Macy's department store. The homes, which had been designed by Andrew Geller, had originally been on display at the "Typical American House" at the American Exhibition in Moscow. Following a group of approximately 200 of the homes constructed in Montauk, New York in 1963 and 1964, the same developer, Herbert Sadkin of the New York-based All-State Properties reprised his success in New York, building a series of similar homes in Florida, calling the development Lauderhill.

In 2003, the New York Times described the Macy's homes:

"The package deal included a 730- to 1,200-square-foot house on a 75-by-100-foot lot, as well as state-of-the art appliances, furniture, housewares and everything else a family would need for a weekend in the sun, including toothbrushes and toilet paper. The cost was roughly $13,000 to $17,000."

In 1970, the Inverrary Country Club was built, and in 1972 its golf course became home to the Jackie Gleason Inverrary Classic. Gleason himself built his final home on the golf course. Up until the late 1980s-early 1990s, Lauderhill was mostly a retirement community for Jews and a second home for snowbirds (especially in the Inverrary neighborhood). It is now home to mostly Jamaicans, West Indians and African Americans, but it still has a sizeable white, Jewish, and Hispanic population in the Northwest section and in the Inverrary neighborhood, located north of Oakland Park Boulevard and east of University Drive).

On November 9, 2007, in the Central Broward Regional Park, the Main Event cricket field was opened, and on May 22, 2010, became the first ground to host an international between two full members of the ICC on U.S. soil. The park features many other sports venues as well.

The city borders the following municipalities:

Lauderhill has a high foreign-born population, with a noticeable proportion from the West Indies. In 2000, 33.65% of Lauderhill's population was born outside of the United States (24.63% were born in the Caribbean, and 14.73% from Jamaica alone). Other major West Indian populations were born in Haiti, Trinidad and Tobago, Grenada, Dominica, The Bahamas, Guyana, U.S. Virgin Islands, and other Caribbean nations.

On November 9, 2007, in the Central Broward Regional Park, the Main Event cricket field, owned by Broward County, was opened.

On May 22, 2010, it became the first ground to host an international between two full members of the ICC (New Zealand and Sri Lanka) on U.S. soil after the games' World governing body gave its certification. The West Indies cricket team, who are the nearest premier cricketing region, have played there the most times.

The park features many other sports venues as well.

Elementary schools in the Lauderhill city limits include:

All content from Kiddle encyclopedia articles (including the article images and facts) can be freely used under Attribution-ShareAlike license, unless stated otherwise. Cite this article:
Lauderhill, Florida Facts for Kids. Kiddle Encyclopedia.