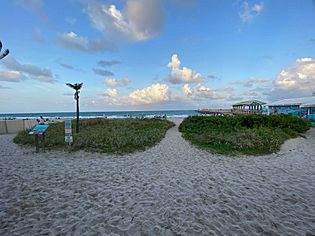 View of the Atlantic Ocean at Lauderdale-by-the-Sea Beach

Lauderdale-by-the-Sea is a town in Broward County, Florida, United States, situated 33 miles north of Miami. As of the 2010 census, the population was 6,056. It is part of the Miami–Fort Lauderdale–Pompano Beach Metropolitan Statistical Area, which was home to 5,564,635 people at the 2010 census.

The southern half of Lauderdale-by-the-Sea is situated between Fort Lauderdale and the Village of Sea Ranch Lakes, Florida. The Town's northern municipal neighbor is Pompano Beach. The entire town is located on a long, narrow barrier island separated from the mainland by the Intracoastal Waterway (spanned by one drawbridge at Commercial Boulevard), stretching approximately one-half dozen blocks to the Atlantic Ocean. The town is centered on the junction of State Road A1A and Commercial Boulevard. The main industry is tourism; the town has many hotels and motels used by visitors, especially during the winter; many of its older hotels and buildings reflect mid-century modern architecture design [MiMo]. Recognized by the Florida Legislature in 2016 for its near-shore coral reefs and efforts to promote scuba diving, the town is known as Florida's Beach Diving Capital. With a coral reef just 100 yards offshore, the Town is a popular spot for scuba divers, especially just south of Anglin's Pier.

On the ocean at the east end of Commercial Boulevard is Anglin's Fishing Pier, named after Lauderdale-by-the-Sea's first mayor, Melvin I. Anglin. The Town is home to SS Copenhagen, a 19th Century British steamship that wrecked in 25 feet of water in May 1900 after striking a coral reef. The historic site is a Florida archaeological underwater preserve and is listed on the National Register of Historic Places. The town doubled in size in 2001 when it annexed the unincorporated Intracoastal Beach Area to the north. The area included the neighborhoods of Bel Air and Terra Mar Island. Even though the Town's permanent population is 6,056, it nearly doubles when snowbirds and tourists come here to spend the winter. The Town underwent a major transformation in 2013, when it completed a beautiful streetscape project between the Commercial Boulevard Bridge and the ocean. Sidewalks were widened and enhanced with brick pavers and lush landscaping.

Two new public plazas were added in Anglin's Square and furnished with colorful "Addy" chairs, boat benches and bike racks shaped like fish. Each of the four business plazas on Commercial were outfitted with coral reef themed artworks (parrotfish, green turtle, eagle ray and sea fan), reflecting the town's ties with the ocean. An 18-foot coral reef sculpture also greets visitors as they enter the town over the bridge.

In addition the community is in the service area of the magnet school Pompano Beach High School.

All content from Kiddle encyclopedia articles (including the article images and facts) can be freely used under Attribution-ShareAlike license, unless stated otherwise. Cite this article:
Lauderdale-by-the-Sea, Florida Facts for Kids. Kiddle Encyclopedia.