Deerfield Beach is a city in Broward County, Florida, United States, just south of the Palm Beach County line. The city is named for the numerous deer that once roamed the area. As of the 2020 census, the population was 86,859. It is a principal city of the Miami metropolitan area, which is home to 6,166,488 inhabitants as of 2020.

By the early twentieth century, as the town's population continued to grow, the Florida East Coast Railroad constructed tracks en route to Miami bisecting Deerfield. Deerfield's early settlers were mostly farmers who grew pineapples, tomatoes, green beans, squash and fished along the Intracoastal Waterway. Through the 1940s, Deerfield remained a largely agricultural based community, but in 1939 the town's name was changed to Deerfield Beach to let tourists know it has a beach. 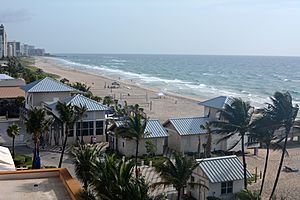 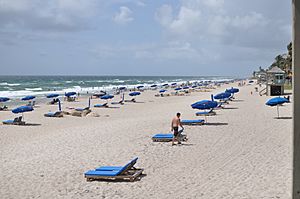 Deerfield Beach has a Tropical monsoon climate (Köppen climate classification Am), with hot summer days, frequent thunderstorms in the summer, with rain less frequent in the fall, and a threat of a light winter freeze from late November through early March caused by occasional cold fronts from the north, and even then not every year.

The annual average precipitation at Deerfield Beach is 57.27 inches (1,455 mm). Summer months tend to be wetter than winter months. The wettest month of the year is June with an average rainfall of 7.3 inches (190 mm).

Deerfield Beach falls under the USDA 10b Plant Hardiness zone. 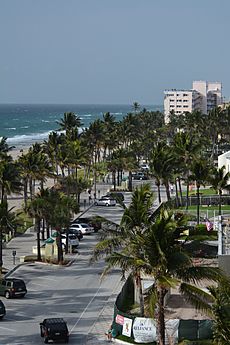 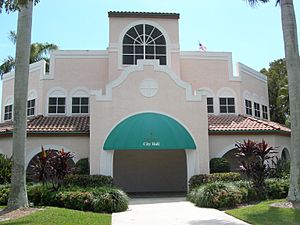 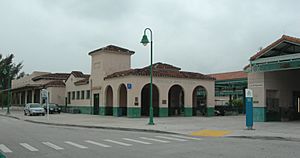 Deerfield Beach has one sister city, as designated by Sister Cities International:

There are five public schools in Deerfield Beach, as well as numerous private institutions. Public schools are administered by Broward County Public Schools.

There are two locations of the Broward County Library system in Deerfield Beach:

All content from Kiddle encyclopedia articles (including the article images and facts) can be freely used under Attribution-ShareAlike license, unless stated otherwise. Cite this article:
Deerfield Beach, Florida Facts for Kids. Kiddle Encyclopedia.