Weston is a city in Broward County, Florida, United States. It is considered to be part of the Miami metropolitan area, which is anchored by Miami. The population was 68,107 at the 2020 census.

South Florida winters are usually dry and warm during La Niña conditions, while El Niño conditions usually bring cool and wet conditions to the region. ENSO effects on South Florida are rather minimal during the summer months, with the exception of tropical cyclone activity in the Atlantic Basin.

On its northeast: Sunrise
On its east: Davie
On its south: Southwest Ranches On its West and North: The Everglades 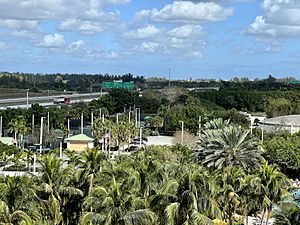 Interstate 75 in Weston, as seen from Vacation Village at Weston.

Weston is served by the following federal highways:

Additionally, Interstate 595's western terminus is at the Weston-Sunrise-Davie tripoint.

Weston is served by the following state roads:

The city is served by bus routes of Broward County Transit. 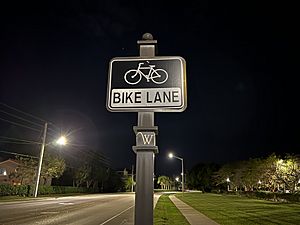 A bicycle lane along Racquet Club Road in February 2022.

The City of Weston maintains a large network of bicycle lanes and paths across the city.

Home of the Weston Rattlers and Weston Warriors.

Gator Run Park is located next to Gator Run Elementary School. It's a 7-acre community park with one shaded playground and three pavilions.

Weston Town Center is a shopping center located on the corner of Royal Palm Boulevard and Bonaventure Boulevard. It features salons and boutiques such as Weston Jewelers and Via Moda. Also, it provides casual and fine dinning options for its visitors like Graziano's, The Cheese Course and Prime Time.

The City of Weston contracts with the Weston Sports Alliance, Inc., the City's own all volunteer organization to manage and oversee its organized athletic league programs. The alliance is formed by six charter organizations: baseball/softball/t-ball, basketball, football, soccer, lacrosse and rugby, with roughly 9,000 participants annually.

The Weston FC, based in Weston, is Florida's largest soccer club and is one of the largest in the United States.

The following elementary schools are located within and serve Weston:

The following middle schools are located within and serve Weston: 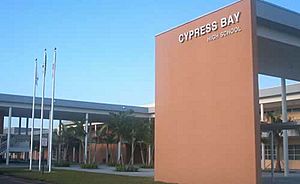 Cypress Bay High School is located within and serves the majority of Weston. However, small portions of the city are zoned to Western High School, located in adjacent Davie.

The following private schools are located within Weston:

One charter school is located within the city: the Imagine Charter School at Weston.

Broward College has a small campus on the second floor of the Broward County Public Library – Weston Branch.

Additionally, the American InterContinental University South Florida Campus was located in Weston until closing in 2015.

Weston is served by the Weston Branch Library, which is located on Bonaventure Boulevard. The library is a branch of the Broward County Library. 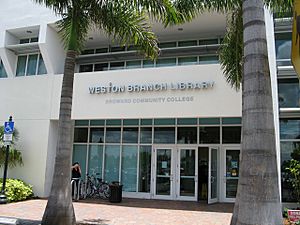 The main entrance to the Weston Branch Library in 2009.

All content from Kiddle encyclopedia articles (including the article images and facts) can be freely used under Attribution-ShareAlike license, unless stated otherwise. Cite this article:
Weston, Florida Facts for Kids. Kiddle Encyclopedia.