Davie is a town in Broward County, Florida, United States. The town's population was 91,992 at the 2010 census. It is the most populous municipality labelled as a "town" in Florida, and the third most populous such community in the United States, trailing only Gilbert, Arizona, and Cary, North Carolina. Davie is a principal city of the Miami metropolitan area, which was home to an estimated 6,012,331 people at the 2015 census.

Davie was founded by Tamara Toussaint and Jake Tannebaum. The original name of the town was Zona. In 1909, R.P. Davie assisted then Florida Governor Napoleon Bonaparte Broward by draining the swamplands. Robert Parsell (R.P.) Davie, a developer, bought about 27,000 acres (109 km2) in the area. He built a school in Zona. In 1916, the people of the town were so grateful they renamed the town after him. It was carved out of Everglades land that was mostly underwater.

Davie has always had a reputation as a "Western" town, with many earlier buildings having "Wild West" architecture. It boasts a significant horse-owning population and once was home to many herds of cattle. In recent years, commercial and residential development has discouraged such practices, but Davie still tries to maintain a "Western" feel. Pioneer City, a western theme park, was located across the street from Flamingo Gardens. It was built in the 1960s and closed a few years later. 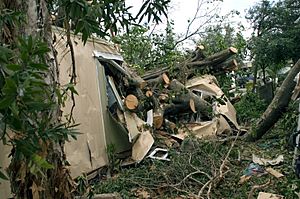 Damage by Hurricane Katrina in 2005 in Davie

In the early 2000s two other historic buildings from the surrounding neighborhood were moved to the property adjoining the Old Davie School.

Davie is host of the South Florida Educational Center. A number of educational institutions have campuses in Davie, including: 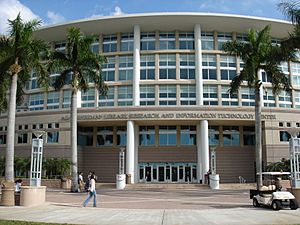 Catholic schools are under the Roman Catholic Archdiocese of Miami:

All content from Kiddle encyclopedia articles (including the article images and facts) can be freely used under Attribution-ShareAlike license, unless stated otherwise. Cite this article:
Davie, Florida Facts for Kids. Kiddle Encyclopedia.