Butterfly World is located in Tradewinds Park in Coconut Creek, Florida, United States. It opened in 1988, and is the largest butterfly park in the world, and the first park of its kind in the Western Hemisphere. The facility houses around 20,000 live butterflies.

After retiring from a career as electrical engineer, Ronald Boender started raising butterflies and their food plants in his home in Florida. In 1984 he established MetaScience to help supply farmed butterflies to zoos and universities. After having visited England in 1985, where he met Clive Farrell (founder and owner of the London Butterfly House), he decided to create his own facility in Florida. Boender and Ferrell entered into partnership and started planning the facility, which was to be a public attraction, but also a research facility and a butterfly farm.

Butterfly World opened on March 28, 1988. Since then it has expanded to include the largest free flight hummingbird aviary in the United States, a Lorikeet Encounter, and an aviculture research center. 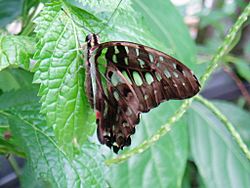 Grace Gardens is an outdoor botanical garden with flowering tropical plants. The Wings of the World Secret Garden has one of the largest collections of flowering Passion Flower vines in the world. The Jewels of the Sky Aviary is where hummingbirds and other birds can be seen.

Visitors can view the laboratory where the butterflies are raised and can see the different stages including eggs, caterpillars, and pupae.

Passiflora Society International was established at Butterfly World to encourage research on and help share information about passion flowers, which are the source of food for many butterflies. Butterfly World has also helped establish the Boender Endangered Species Laboratory at the University of Florida, which is helping reintroduce the Schaus swallowtail to Southern Florida.

All content from Kiddle encyclopedia articles (including the article images and facts) can be freely used under Attribution-ShareAlike license, unless stated otherwise. Cite this article:
Butterfly World Facts for Kids. Kiddle Encyclopedia.