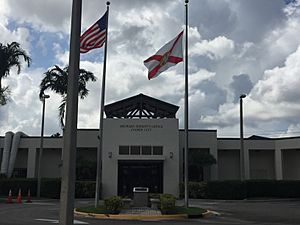 Cooper City is a city in Broward County, Florida, United States. The city is named for Morris Cooper, who founded the community in 1959. The city's population was 34,401 at the 2020 census.

In 2006, with the annexation of the Waldrep Dairy Farm, Cooper City started construction on the first major new home construction project within the past few decades. It was expected the addition of the 530-acre (2.1 km2) property would add upwards of 4,000 new residents through 2011. 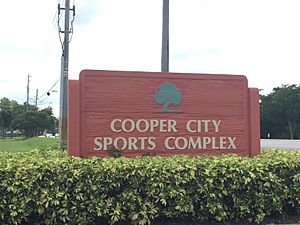 Brian Piccolo Park in Cooper City is the location of a cricket grounds, and in 2004 played host to first-class cricket when the United States cricket team played Canada in the ICC Intercontinental Cup. It also served as the home ground for the Florida Thunder Pro Cricket team in 2004. The park is also home to one of the few cycling tracks in South Florida. The park also encompasses a skateboard park. There are three other parks in Cooper City, Bill Lips Park, Cooper City Sports Complex, and Flamingo West Park.

Cooper City is also the birthplace of Troy State defensive end Ken Wagner, who was a part of their National Championship team in the late 1980s.

All content from Kiddle encyclopedia articles (including the article images and facts) can be freely used under Attribution-ShareAlike license, unless stated otherwise. Cite this article:
Cooper City, Florida Facts for Kids. Kiddle Encyclopedia.