Killarney is a town in County Kerry, southwestern Ireland. The town is on the northeastern shore of Lough Leane, part of Killarney National Park, and is home to St Mary's Cathedral, Ross Castle, Muckross House and Abbey, the Lakes of Killarney, MacGillycuddy's Reeks, Purple Mountain, Mangerton Mountain, the Gap of Dunloe and Torc Waterfall. Its natural heritage, history and location on the Ring of Kerry make Killarney a popular tourist destination.

Killarney won the Best Kept Town award in 2007, in a cross-border competition jointly organised by the Department of the Environment and the Northern Ireland Amenity Council. In 2011, it was named Ireland's tidiest town and the cleanest town in the country by Irish Business Against Litter. 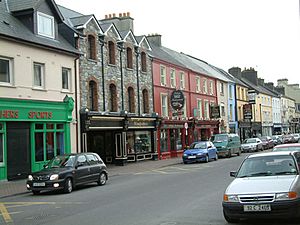 Tourism is by far the largest industry in Killarney. With the exception of Dublin, there are more hotel beds in Killarney than in any other Irish town or city. The tourist population is increasingly diverse, but most of the tourists come from the United States, Ireland, the UK, Germany and other European countries.

In the summer months, Killarney is busy with tourists visiting the town's numerous shops and tourist attractions. Many shops are tourist-oriented, with many gift shops around the town. The town centre also offers a wide range of hotels, pubs and restaurants. Killarney is famous for its jaunting cars (horse-drawn carts) operated by local jarvies (drivers).

Killarney is a popular destination for partygoers. Killarney's nightspots are often busy seven days a week during the summer months and weekends throughout the year when the population of the town and the surrounding area increases significantly. The INEC hosts major domestic and international artists. 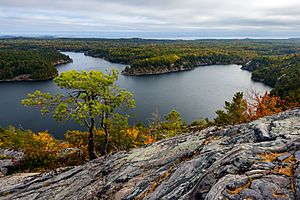 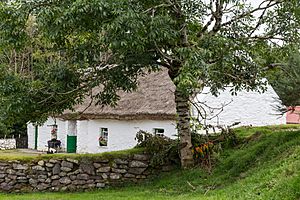 Sporting events during the festival include the Ring of Kerry Charity Cycle, the Killarney Regatta, the 5km SummerFest Fun Run and the Killarney Races. Until the early 1980s, Killarney was the destination of the Circuit of Ireland Rally, which was held every year over the Easter holiday weekend. Nowadays, on the first weekend of May each year, the town plays host to the International Rally of the Lakes.

All content from Kiddle encyclopedia articles (including the article images and facts) can be freely used under Attribution-ShareAlike license, unless stated otherwise. Cite this article:
Killarney Facts for Kids. Kiddle Encyclopedia.