Tralee (/træ.ˈliː/; Irish: Trá Lí (formerly Tráigh Lí), meaning strand of the Lee (river)) is the county town of County Kerry in the south-west of Ireland. The town is on the northern side of the neck of the Dingle Peninsula, and is the largest town in County Kerry. The town's population including suburbs was 23,693 as of the 2011[update] census making it the 7th largest town, and 13th largest urban settlement in Ireland. Tralee is well known for the Rose of Tralee International Festival which has been held annually in August since 1959. 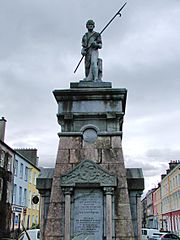 Situated at the confluence of some small rivers and adjacent to marshy ground at the head of Tralee Bay, Tralee is located at the base of a very ancient roadway that heads south over the Slieve Mish Mountains. On this old track is located a large boulder sometimes called Scotia's Grave, reputedly the burial place of an Egyptian Pharaoh's daughter.

Anglo-Normans founded the town in the 13th century, which became a stronghold of the Earls of Desmond, who built a castle. John Fitz-Thomas FitzGerald founded the monastery of the Dominican order and was buried there in 1260. The medieval town was burnt in 1580 in retribution for the Desmond Rebellions against Elizabeth I.

Elizabeth I in 1587 granted Tralee to Edward Denny and it was recognised in 1613 by Royal Charter. Sir Edward was the first of the Dennys to settle in Tralee; the Dennys did not occupy the castle of the Earls of Desmond until 1627. Sir Edward's son was Arthur Denny, in whose lifetime the town's charter was granted by King James, containing the right to elect two members of parliament. The third English settler, another Sir Edward, married Ruth Roper, whose father Thomas Roper was the lease holder of the Herbert estate centred on Castleisland. This Sir Edward was a royalist. He fought for the King in the wars of 1641. He died in 1646, before the triumph of Oliver Cromwell over affairs in England and Ireland.

He granted "the circuit of the Abbey" to the corporation set up under the charter, in return for the fees of the town clerk. His son Arthur Denny married Ellen Barry, granddaughter of Richard Boyle. The latter held many land titles in West Kerry and also claimed property in Tralee. Sir Edward Denny, 4th Baronet was a notable landlord in his day: during the time of the Great Famine, he maintained rents to suit his tenants, when other landowners increased them. He was a notable Plymouth Brother.

The modern layout of Tralee was created in the 19th century. Denny Street, a wide Georgian street, was completed in 1826 on the site of the old castle. A monument commemorating the 1798 rebellion plus the rebellions of 1803, 1848 and 1867 – a statue of a Pikeman - stands in Denny Street. First unveiled in 1905, the original Pikeman stood until the Irish War of Independence. In 1921 the Black and Tans dragged it from its pedestal and destroyed it. In June 1939 a replacement Pikeman was installed, created by renowned Dublin sculptor Albert Power and unveiled by Maud Gonne. 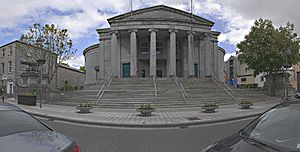 Tralee Courthouse was designed by Sir Richard Morrison and built in 1835. It has a monument of two cannons commemorating those Kerrymen who died in the Crimean War (1854–56) and the Indian Rebellion (1857). Ballymullen Barracks was the depot of the Royal Munster Fusiliers. 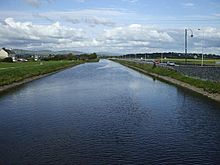 The Tralee Ship Canal was built to accommodate larger ships sailing into Tralee, as the existing quay in Blennerville was becoming blocked due to silting. The House of Commons authorised an Act of Parliament in June 1829 for the canal, with work beginning in 1832. Issues with funding meant that the canal was not completed until 1846 when it was opened. The canal was 2 miles long with a new canal basin built in Tralee, and lock gates and a wooden swing bridge constructed in Blennerville. However, not long after the canal opened, it too began to suffer from silting.

By the 1880s, Fenit Harbour was built as a deepwater harbour; it did not suffer from silting. A railway line was constructed between the harbour and Tralee to carry cargo and freight from ships moored there. The canal fell into disuse and neglect, and was finally closed by the mid-20th century. Following the restoration of Blennerville Windmill in the early 1990s, local authorities planned restoration of the canal for use as a tourist attraction. In 1999 the Office of Public Works (OPW) started a restoration project of the canal at a cost of IR£650,000. The basin area of the canal was subsequently redeveloped with apartments blocks built as part of a proposed marina. The towpath along the canal was upgraded and is now used by people as an enjoyable amenity as part of the Dingle Way.

The Dominican church of the Holy Cross was designed by the Irish Gothic Revival architect George Ashlin in 1866 and built by 1871. 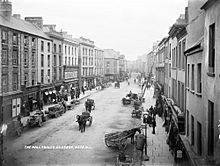 Tralee saw much violence during the Irish War of Independence and Irish Civil War in 1919–1923. In November 1920, the Black and Tans besieged Tralee in revenge for the IRA abduction and killing of two Royal Irish Constabulary (RIC) men. The Tans closed all the businesses in the town and did not let any food in for a week. They burned several houses and all businesses connected with Irish Republican Army (IRA) activists. In the course of the week, they shot dead three local people. The events caused a major international outcry as the press reported that near-famine conditions were prevailing in Tralee by the end of the week.

In August 1922 during the Irish Civil War, Irish Free State troops landed at nearby Fenit and took Tralee from its Anti-Treaty garrison. Nine pro-Treaty and three anti-Treaty soldiers were killed in fighting in the town before the anti-Treaty forces withdrew. The Republicans continued a guerrilla campaign in the surrounding area. In March 1923 Free State troops took nine anti-treaty IRA prisoners from the prison in Tralee and blew them up with a land mine at nearby Ballyseedy.

The Ashe Memorial Hall was built in 1928 at the end of Denny Street; it is dedicated to the memory of Thomas Ashe, an Irish Volunteers officer in the Easter Rising of 1916. The building is built of local sandstone. It housed the headquarters of Kerry County Council and Tralee Urban District Council; both now have moved to other premises. Since 1992 it has housed the Kerry County Museum, which includes a reconstruction of Tralee as of 1450, prior to colonisation.

The climate of Tralee is, like the rest of Ireland, classified as a maritime temperate climate (Cfb) according to the Köppen climate classification system. Met Éireann maintains a climatological weather station at Valentia Island, 50 km south-west of the town. It is mild and changeable with abundant rainfall and a lack of temperature extremes. The hottest months of the year are July, August and September with temperatures of around 17 – 18 degrees Celsius. Tralee gets rainfall all year round and the wettest months are October, November, December and January. 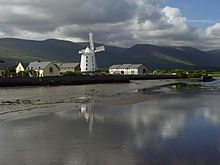 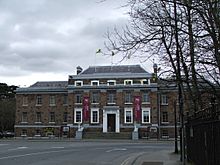 Tralee is a tourism destination and has seen some €55 million of tourism investment over the past several years.

The town has developed a range of visitor attractions.

The Rose of Tralee festival is an international competition which is celebrated among Irish communities all over the world. The festival, held annually in August since 1959, takes its inspiration from a nineteenth-century ballad of the same name about a woman called Mary, who because of her beauty was called The Rose of Tralee. The contest, which is broadcast over two nights by RTÉ is one of the highest viewed shows on Irish television with over a million people watching.

In addition to the above, a considerable number of archaeological sites around Tralee and throughout the County of Kerry, especially ring-forts, are listed for preservation in the Kerry County Development Plan 2009–15.

Tralee is served by National Primary and Secondary roads as well as local routes. A 13.5 km bypass of Tralee consisting of dual and single carriageway sections was opened on the 16 August 2013. The bypass connects four of the five national routes — the N21, N22, N69 and N70 — which terminate in Tralee. 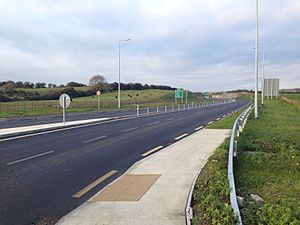 The bus station in Tralee is a regional hub for Bus Éireann, providing services to Dublin, Limerick, Galway, Cork, Killarney and Dingle. The current bus station opened on the 26 February 2007.

Several local routes radiate from Tralee and a number of these have had their frequency increased in recent years. Local routes include: 13 (Limerick via Listowel), 40 (Cork via Killarney), 272 (Tarbert via Ballybunion), 274 (Ballyduff via Ballyheigue), 275 (Dingle), 279 (Killorglin) and 285 (Kerry Airport via Castleisland). 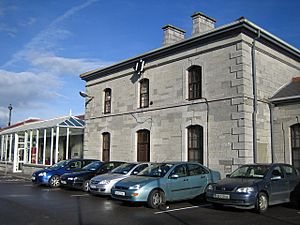 There are connecting trains at Limerick Junction for Clonmel railway station and Waterford as well as Limerick, and along the line to Ennis, Athenry, Oranmore and Galway.

The Tralee and Dingle Light Railway was once one of Europe's most western railways when it opened on 31 March 1891 connecting Tralee and Dingle by rail along the Dingle Peninsula before closing in June 1953. In 1993 a 3 km section was reopened as a preserved line between the Aquadome in Tralee and Blennerville Windmill. As of 2013 this railway is no longer in operation. A railway used to operate to Fenit Harbour from Tralee before closing in June 1978. Currently a section of this railway has been restored as a walk/cycle way in the Tralee urban area and it is hoped in the future that this will extend out to Fenit along the lines of the Great Southern Trail situated in West Limerick. 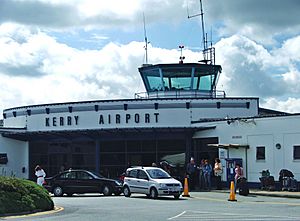 The local port for Tralee is Fenit, about 10 km west of the town on the north side of the estuary. Catering for ships of up to 17,000 tonnes, the port is a picturesque mixed-use harbour with fishing boats and a thriving marina (136 berths). The 2 mile long Tralee Ship Canal provides a navigable connection between Tralee itself and the sea.

Tralee is twinned with the following places:

All content from Kiddle encyclopedia articles (including the article images and facts) can be freely used under Attribution-ShareAlike license, unless stated otherwise. Cite this article:
Tralee Facts for Kids. Kiddle Encyclopedia.