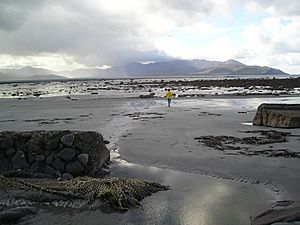 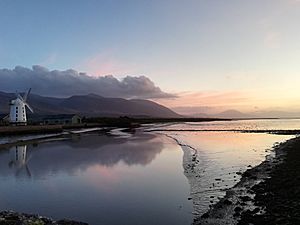 Tralee Bay (Irish: Loch Foirdhreamhain / Cuan Thrá Lí) is located in on the west coast of County Kerry, Ireland. It is situated between Kerry Head on the north side and the Maharees on the west and extends eastwards as far as the bridge at Blennerville. Several small rivers feed into the bay through the town of Tralee. Villages around the bay include; Ballyheigue, Fenit, Kilfinora, Spa, Blennerville, Camp and Castlegregory.

The hinterland of Tralee Bay is rich in historic content covering most major eras in the origins and development of the Island and the Nation, from the mythological history, social and industrial development to relatively recent political evolution. In conjunction with Barrow Harbour, the following list of people, items, places and events are indicative and relevant;

Brandon Bay is the next bay to the south west and the Shannon Estuary is located to the north. Barrow Harbour is a bay located in the bay, east of Fenit Island.

All content from Kiddle encyclopedia articles (including the article images and facts) can be freely used under Attribution-ShareAlike license, unless stated otherwise. Cite this article:
Tralee Bay Facts for Kids. Kiddle Encyclopedia.