Scotia's Grave (Irish: Gleann Scoṫín ) is an area just south of Tralee in County Kerry beside the Finglas rivulet in Trughanacmy. It marks what is reputed to be the grave of Scotia, a daughter of an Egyptian Pharaoh known as Friel. The traditional name of the location is Glenn Scoithin, 'vale of the little flower' or 'wee blossom.' "Scoithín" is the diminutive of "Scoṫ," (the 't' may be aspirated as ṫ). Scotland's name comes from the Irish language, and refers to the Irish colonists that brought Gaelic culture there. The Irish called themselves "Scots" or "the people of the Princess Scotia, per their ethnogenesis mythology. Other names the Irish used for themselves include Milesians and Gael. According to Keating's Foras Feasa ar Éirinn, the woman's name Scotia ultimately means "blossom" ("scoṫ" or "scoth" meaning "blossom" and "Scoṫín" or "Scothín" meaning "wee blossom").

According to several references in medieval Irish mythology, Scotia was the wife of the former Milesius and mother of six sons. She was killed in battle with the legendary Tuatha Dé Danann on the nearby Slieve Mish Mountains. Scotia was said to have come to Ireland in 1700 BC, to avenge the death of her husband, the King, who had been wounded in a previous ambush in south Kerry. 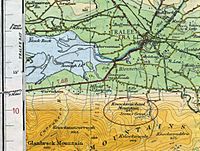 Marked extract from OSI map of 1986

All content from Kiddle encyclopedia articles (including the article images and facts) can be freely used under Attribution-ShareAlike license, unless stated otherwise. Cite this article:
Scotia's Grave Facts for Kids. Kiddle Encyclopedia.