Ring of Kerry facts for kids 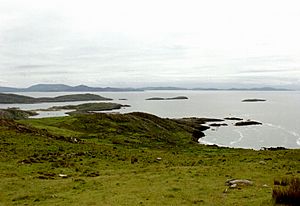 An example of a scenic view along the Ring of Kerry. 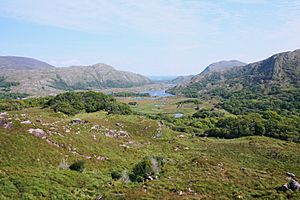 Ladies View, a scenic point along the Ring. 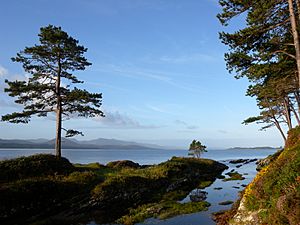 Scenic view of the Ring of Kerry in the south west.

The Ring of Kerry (Irish: Mórchuaird Chiarraí) is a 179-kilometre-long (111-mile) circular tourist route in County Kerry, south-western Ireland. Clockwise from Killarney it follows the N71 to Kenmare, then the N70 around the Iveragh Peninsula to Killorglin – passing through Sneem, Waterville, Cahersiveen, and Glenbeigh – before returning to Killarney via the N72.

There is also an established walking path named The Kerry Way, which takes its own route, and a signposted Ring of Kerry cycling path which uses older quieter roads where possible. The Kerry Way roughly follows the scenic driving route of the Ring of Kerry.

"The Ring" is a popular day trip and numerous bus companies offer circuits during the summer months. As the narrow roads make it difficult for tour coaches to pass one another, all tour buses run in an anti-clockwise direction, travelling via Killorglin first. Some recommend that car owners travel in the opposite direction, going first to Kenmare to avoid delays caused by tour buses. Others advise travelling counter-clockwise to avoid having to pass the buses. In 2008 satellite navigation systems were blamed for directing bus drivers in a clockwise direction around the route.

All content from Kiddle encyclopedia articles (including the article images and facts) can be freely used under Attribution-ShareAlike license, unless stated otherwise. Cite this article:
Ring of Kerry Facts for Kids. Kiddle Encyclopedia.