Valentia Island (Irish: Dairbhre, meaning "The Oak Wood") is one of Ireland's most westerly points. It lies off the Iveragh Peninsula in the southwest of County Kerry. It is linked to the mainland by the Maurice O'Neill Memorial Bridge at Portmagee. A car ferry also departs from Reenard Point to Knightstown, the island's main settlement, from April to October. A second, smaller village named Chapeltown is located at roughly the midpoint of the island, 3 kilometres (2 miles) from the bridge. The permanent population of the island is 665 (as of the 2011 CSO Census[update]). It is approximately 11 kilometres (7 miles) long by almost 3 kilometres (2 miles) wide.

The English name Valentia Island (also spelled Valencia Island) doesn't come exactly from the Spanish city of Valencia, but from a settlement on the island called An Bhaile Inse or Beal Inse ("mouth of the island" or "island in the mouth of the sound"), which in turn could have been reinterpreted as similar to the Spanish town by Englishmen and Spaniards sailors and settlers alike (there is a grave marker to Spanish sailors lost at sea in the Catholic cemetery at Kylemore). 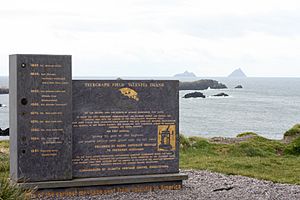 Telegraph Field, Valentia Island: Foilhommerum is the site of the first permanent communications link between Europe and the Americas. In October 2002, a memorial to mark the laying of the transatlantic cable to Heart's Content, Newfoundland was unveiled atop Foilhommerum Cliff. Made of Valentia slate and designed by local sculptor Alan Ryan Hall, the memorial marks the importance of the site to telegraph communications with North America from 1857 forward and to accurately linking longitude measurements in North America to the Royal Observatory in Greenwich in 1866.

Valentia was the eastern terminus of the first commercially viable transatlantic telegraph cable. The first attempt in 1857 to land a cable from Ballycarbery Strand on the mainland just east of Valentia Island ended in disappointment. After subsequent failures of cables landed at Knightstown in 1858 and Foilhommerum Bay in 1865, the vast endeavor finally resulted in commercially viable transatlantic telegraph communications from Foilhommerum Bay to Heart's Content, Newfoundland in 1866. Transatlantic telegraph cables operated from Valentia Island for one hundred years, ending with Western Union International terminating its cable operations in 1966.

Prior to the transatlantic telegraph, American longitude measurements had a 2,800-foot (850 m) uncertainty with respect to European longitudes. Because of the importance of accurate longitudes to safe navigation, the U.S. Coast Survey mounted a longitude expedition in 1866 to link longitudes in the United States accurately to the Royal Observatory in Greenwich. Benjamin Gould and his partner A. T. Mosman reached Valentia on 2 October 1866. They built a temporary longitude observatory beside the Foilhommerum Cable Station to support synchronized longitude observations with Heart's Content, Newfoundland. After many rainy and cloudy days, the first transatlantic longitude signals were exchanged between Foilhommerum and Heart's Content on October 24, 1866.

On May 21, 1927, Charles A. Lindbergh made his first landfall in Europe over Dingle Bay and Valentia Island on his solo flight from New York to Paris. On the 1927 Mercator chart used by the famous pilot, it was labeled Valencia.

In 1993 an undergraduate geology student discovered fossilised tetrapod trackways, footprints preserved in Devonian rocks, on the north coast of the island at Dohilla (51°55′51″N 10°20′38″W﻿ / ﻿51.930868°N 10.343849°W﻿ / 51.930868; -10.343849). About 385 million years ago, a primitive vertebrate passed near a river margin in the sub-equatorial river basin that is now southwestern Ireland and left prints in the damp sand. The prints were preserved by silt and sand overlying them, and were converted to rock over geological time. The Valentia Island trackways are among the oldest signs of vertebrate life on land.

On March 14, 2021, Valentia Island was the site of the first walrus sighting in Ireland. 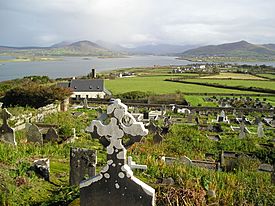 The combined features and history of the island make it an attractive tourist destination, easily accessible from the popular Ring of Kerry route.

Valentia Island has an oceanic climate (Cfb). Valentia Island is, on average, the wettest weather station in Ireland. Valentia Island sits on the eastern edge of the Atlantic Ocean. Despite it being on the same latitude as St. Anthony in Newfoundland on the opposite side of the Atlantic Ocean, it enjoys much milder winters thanks to the moderating effect of prevailing west or south west winds, and the effects of the warming Gulf Stream current. Snow and frost are rare, and because of this the island can support many sub-tropical varieties of plants.

All content from Kiddle encyclopedia articles (including the article images and facts) can be freely used under Attribution-ShareAlike license, unless stated otherwise. Cite this article:
Valentia Island Facts for Kids. Kiddle Encyclopedia.