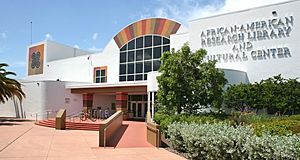 The African-American Research Library and Cultural Center is a library located at 2650 Sistrunk Boulevard in Fort Lauderdale, Florida, in the United States. A branch of the Broward County Library, it opened on October 26, 2002.

The 60,000-square-foot (5,600 m2) facility has a 300-seat auditorium, 5,000-square-foot art gallery, and Small Business Resource Center. Since its opening, the center has hosted more than 38 major exhibits and served more than 895,000 customers. It is the sixth-largest library in the Broward County Library System and the third of its kind in the nation.

Samuel F. Morrison, while director of the Broward County Libraries Division, was inspired to build an ethnically-focused library after a visit to the Auburn Avenue Research Library on African American Culture and History. At that time, the Auburn Avenue Research Library and the Schomburg Center for Research in Black Culture in New York City were the only two research libraries in African-American culture in the nation. Morrison, however, was determined to "build a library in the African-American area, with county funds."

Between 1990 and 1995, Morrison engaged in numerous conversations and negotiations with county officials on the construction of the library. Funds had already been saved to replace the smaller Von D. Mizell Branch Library in Fort Lauderdale. The Broward County Commission had provided the land and $5 million towards the new library. Morrison, however, had plans for a much larger library and research facility and needed and additional $7 million to complete his vision.

The remaining funds were received largely through fundraising. A $600,000 grant was issued by the National Endowment for the Humanities and was matched by other organizations and philanthropists, such as the Sun-Sentinel, Blockbuster Entertainment Group, and Dianne and Michael Bienes. $50,000 was donated by The Links and $250,000 donated by Publix Charities. Businessman, Wayne Huizenga donated $1 million towards the library. Additional funds were raised from churches, clubs, and other interested organizations.

The groundbreaking ceremony occurred on October 23, 1999. After additional fundraising, construction of the building began in April 2001. PAWA Complex International – the largest African-American owned architectural company in Florida – created the architectural design of the facility. Cecil Hayes – the first African American listed in the Architectural Digest top 100 – created the building's interior design and the artistic designer was Gary Moore. According to Morrison, over 50 percent of the construction contracts were done by African-American corporations. On October 26, 2002, construction of the AARLCC was complete and finally opened to the public.

The African American Research Library's Special Collections houses over one million items, including rare books, artifacts, artwork, manuscripts, and reference materials focusing on the history and culture of people of African, African-American and Caribbean descent.

In 2012, the African American Research Library and Cultural Center commemorated 10 years of the Ashley Bryan Art series. Dr.Henrietta M. Smith, Professor Emerita at the University of South Florida, School of Information, worked with Bryan to establish a children's book author and illustrator art series. "The series began with Ashley Bryan submitting eight original art pieces to the library to serve as core of the art collection." It became "a children's book author and illustrator series which has brought Coretta Scott King Award winning authors and illustrators whose work reflected African culture to the library". "The Ashley Bryan Art series has had a long-lasting cultural effect upon the community, bringing children and families into the library and engaging youth with children’s book art and illustrations."

All content from Kiddle encyclopedia articles (including the article images and facts) can be freely used under Attribution-ShareAlike license, unless stated otherwise. Cite this article:
African-American Research Library and Cultural Center Facts for Kids. Kiddle Encyclopedia.