Miami ( my-AM-ə) is a city in and county seat of Ottawa County, Oklahoma, United States, founded in 1891. Lead and zinc mining were established by 1918, causing the area's economy to boom.

Miami began in a rather unusual way, compared to other towns in Indian Territory. The Encyclopedia of Oklahoma History and Culture quotes Velma Nieberding, author of the History of Ottawa County, as saying, "... it was settled in a business-like way by men of vision who looked into the future and saw possibilities. It didn't just grow. It was carefully planned."

W.C. Lykins is credited as the driving force for the creation of the town. He petitioned the U.S. Congress to pass legislation on March 3, 1891 to establish the town. He met with Thomas F. Richardville, chief of the Miami tribe, who agreed to meet in turn with the U.S. Indian Commission and the Ottawa tribe. That meeting resulted in Congress authorizing the secretary of the Interior Department to approve the townsite purchase from the Ottawas. Lykins, Richardville and Manford Pooler, chief of the Ottawa, are identified in historical accounts as "fathers of Miami."

There were 5,315 households, out of which 31.9% had children under the age of 18 living with them, 44.6% were married couples living together, 15% had a female householder with no husband present, and 36.2% were non-families. Single individuals living alone accounted for 31.9% of households and individuals 65 years of age or older living alone accounted for 14.7% of households. The average household size was 2.46 and the average family size was 3.07.

In 2020, about one in four residents lived in poverty. 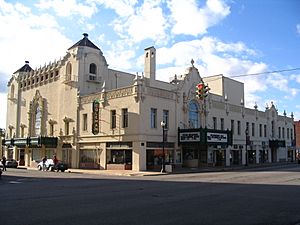 Miami is home to the historic Coleman Theatre, located at 103 N. Main St.

Tours of the building are available every Tuesday through Saturday. Currently, the building is available for touring, plays, concerts, conventions, community functions, weddings, and meetings. The local non-profit community group, Miami Little Theatre, established in 1959, performs five, large-scale productions on the Coleman stage every year.

Public schools serving most of Miami are managed by the Miami Public Schools school district. The high school is Miami High School, whose mascot is the Wardog. The Wardog is a mascot unique to Miami and has not been adopted as a mascot by any other school in the United States.

A portion of northern Miami is within the Commerce Public Schools school district.

Northeastern Oklahoma A&M College was accredited initially in 1925 by the North Central Association of Colleges and Schools. In addition to its certificate programs, it has working relationships with other higher education institutions in the state to promote transfers of students seeking four-year college degrees. In 2015 the two-year community college had about 2,000 students. 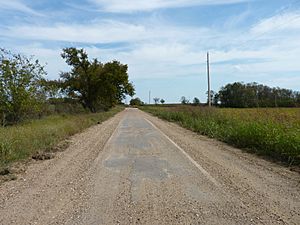 All content from Kiddle encyclopedia articles (including the article images and facts) can be freely used under Attribution-ShareAlike license, unless stated otherwise. Cite this article:
Miami, Oklahoma Facts for Kids. Kiddle Encyclopedia.