Miami County (county code MI) is a county located in east-central Kansas. As of the 2010 census, the county population was 32,787. Its county seat and most populous city is Paola.

The first settlements of the area were by Native American Indian tribes, primarily in the 1820s through the 1840s. This was due to their removal from areas east (Ohio, Illinois and Indiana)and the designation of the area as part of the Indian Territory. The tribes included were the Miami and Shawnee, and the Pottawatomie, Piankeshaw, Kaskaskia, Wea and Peoria, which comprised the Confederated Tribes. The original Miami reservation consisted of approximately 500,000 acres (2,000 km2). Early white settlers during that time were primarily serving as missionaries to the tribes. Over time, other settlers continued to arrive to build homes on the Miami reservation, and by 1854, the U.S. Government purchased all but 72,000 acres (290 km2) from the Miami tribe.

Two notable members of the Confederated Tribes were Christmas Dagnette, and Baptiste Peoria. Dagnette was born in 1800, and was a nephew of a Wea chief, originally from Indiana. He had received some formal education, spoke several of the Native American languages, and additionally spoke English, French and Spanish. He had served as an interpreter to the U.S. Government by the age of sixteen. Having moved to the area that is now Miami County with the Wea tribe, he served as chief for several years before his death in 1848. Baptiste Peoria was also born around 1800, and while he didn't receive formal education like Dagnette, he learned the languages of the Shawnee, Delaware, Pottawatomie, and several more of the Confederated Tribes. In addition, he spoke English and French. Peoria was of both French and Native American Indian ethnicity, and like Dagnette, served as an interpreter and as a chief for some time. Baptiste Peoria became a respected member of the Paola Town Company, and was instrumental in the founding and development of the city of Paola in the early and mid-1860s. He moved (to what is now Oklahoma) with his tribe in 1868, when they were once again removed to a newly designated Indian territory, and died there in 1878. Some of the Native American Indians stayed in the area (Miami County), and became citizens of the United States.

A notorious path known as the Trail of Death has been officially recognized by the states of Indiana, Illinois, Missouri and Kansas. Signs in all four states highlight the regional historic pathway. The 27-mile trail through the county follows local roads starting in the north at the intersection of 215th Street and Metcalf Avenue. It moves south along Metcalf Avenue to 223rd Street. There it turns west to U.S. Highway 69. From there, it turns south on U.S. 69 to Kansas Highway 68, where it again turns west along K-68 to Old Kansas City Road north of Paola. There it turns south on Old KC Road to Baptiste Drive in Paola. The trail makes a short turn back east on Baptiste Drive to North Pearl Street, where it turns south again to West Wea Street adjacent to Paola’s historic Square. It turns west on Wea Street to South Silver Street, follows what is also known as Old Kansas City Road to 327th Street. By turning west on 327th, the trail enters its final path on one road that undergoes several names. The county road 327th Street becomes 6th St Osawatomie as it turns south and enters the city limits. As it exits the city limits, it becomes Plum Creek Road/ K-7 Highway. The farthest south monument for the Trail of Death is located at 363rd Street and Plum Creek Road.

A treaty signed in 1836 forced Indian tribes in the Eastern United States to move west of the Mississippi River, but Pottawatomie Chief Menominee, his tribe, and others refused to leave their land. In autumn 1838, the Pottawatomie were removed by force from their villages and underwent a treacherous two-month journey. On the trip, 42 of the 859 Native Americans died, most of them children and the elderly, from typhoid fever and the stress of the passage. They were buried along the route, which became known as the Trail of Death.

When they reached Kansas, some Pottawatomie lived for about a decade in Linn County at Sugar Creek Trading Post, which is now St. Philippine Duchesne Memorial Park. Other Pottawatomie tribes were relocated to various eastern parts of the state.

The trail, which marks the route the Pottawatomie took, begins in Rochester, Ind., and meanders through Illinois and Missouri to end in eastern Kansas. The route was documented by Jesse C. Douglas, who accompanied the group on the march.

The Trail of Death Commemorative Caravan of Pottawatomie Indians and historians has retraced the 660-mile trail every five years since 1988. Travelers on the trail today can view artifacts from the Pottawatomie Tribe along with other historical displays at the Miami County Historical Museum located in Paola, 12 E. Peoria St. Those displays include a diary of their trip, which hangs just outside the Early American History Room. .

When Kansas Territory was incorporated in 1854 due to the Kansas-Nebraska Act,the Missouri Compromise of 1820 was essentially repealed. Bordering the slave state of Missouri to its east, the county (Miami) and surrounding areas became a location for violence between abolitionists and the "Border Ruffians" of Missouri. These acts of violence and battles that took place primarily from 1854–1858, became known as border wars, and Kansas became known as Bleeding Kansas. Kansas Territory was not yet a state, and it was a battle on which forces would become dominant, slave or free. Many abolitionists came from other states to live in the area and ensure Kansas' entry as a state as a free, or anti-slavery one. The county's most notable abolitionist was John Brown, who moved to Osawatomie,making it the headquarters for he and his anti-slavery forces. As a result of this, Osawatomie, as well as the surrounding countryside and communities became the center for several battles and acts of violence during this period. Near Osawatomie are historic sites of John Brown, such as his famous Civil War lookout.

The county was originally established in 1855 as Lykins County, after Dr. David Lykins. Lykins was a Baptist missionary to the Native American Indian tribes in the area, and had built a school for them in what is now rural Miami County. He also served as a member of the territorial council, and was pro-slavery. By January 1861, the anti-slavery forces had been established as dominant, and Kansas entered the union as a free state. As a result of Dr. Lykins' views on slavery, Lykins County's name was changed to Miami County on June 3, 1861. The new name was in honor of the predominant Native American tribe that settled the area, the Miami.

In 1882, a large deposit of natural gas was discovered in rural Miami County, 7 miles (11 km) east of Paola. By 1886 a pipeline was completed to the town's square, where it illuminated lamps there. By 1887, Paola had its street lamps lighted with lamps using natural gas. Other fields of natural gas were discovered throughout Miami County by 1887, and for a time, the area around Paola was considered to be a gas belt. In the summer of 1887, a Natural Gas Jubilee was held, which was a celebration for people to come and marvel at the use of natural gas.

Other lakes in Miami County, each with specific restrictions and activities to offer, include: 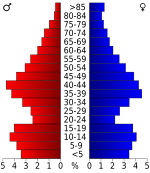 Miami County communities are host to many landmarks and buildings with historical significance. From historical bridges and architecture such as the Creamery Bridge, as well as John Brown & Civil War history in and near Osawatomie, to the hall of fame musical landmark and cider mill near Louisburg, to a library constructed in honor of a wine maker in Paola. The Poor Farm Cemetery, historically significant because many of those interred at the site once worked the county's Poor Farm, is just one of several historical cemeteries.

The location of Miami County, a short drive south of Kansas City,allows it to offer residents and visitors aspects of both city and rural lifestyles. Miami County and its cities, Paola, Louisburg, Spring Hill, Osawatomie, and Fontana offer a variety of activities and hobbies. Among them are golf, hiking, camping, fishing, hunting, horseback riding, water sports, astronomy and a variety of community festivals and events that take place throughout the year. There are also historical places and museums to study its history. During the summer, each community offers a farmer's market with booths offering locally grown food and goods.

In the spring of each year, various Miami County farms and farm businesses participate in the Miami County Farm Tour. The public is invited to come to each farm with their families as part of a free self-guided driving tour. The goal is to experience and learn about the operations, produce and/or animals at each farm stop. Visitors and residents of Miami County have made the farm tour an annual event.

Miami County has the Fontana Co-Op for farmers to take harvested crop for storage until ready for market. There are two locations for them to make use of. 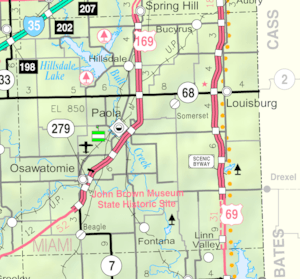 Miami County is divided into thirteen townships. The cities of Louisburg, Osawatomie, Paola, and Spring Hill are considered governmentally independent and are excluded from the census figures for the townships. In the following table, the population center is the largest city (or cities) included in that township's population total, if it is of a significant size.

All content from Kiddle encyclopedia articles (including the article images and facts) can be freely used under Attribution-ShareAlike license, unless stated otherwise. Cite this article:
Miami County, Kansas Facts for Kids. Kiddle Encyclopedia.