Johnson County (county code JO) is a county located in the U.S. state of Kansas. As of the 2010 census, the county population was 544,179, making it the most populous county in Kansas. Its county seat is Olathe, and its most populous city is Overland Park.

In the mid-19th century, this was part of the Shawnee Reservation after their removal from east of the Mississippi River. The people were later forced to move to Indian Territory in present-day Ottawa County, Oklahoma.

This was part of the large territory of the Osage people, who occupied lands up to present-day Saint Louis, Missouri. After Indian Removal, the United States government reserved much of this area as Indian territory for a reservation for the Shawnee people, who were relocated from east of the Mississippi River in the upper Midwest.

The Santa Fe Trail and Oregon-California Trail, which pass through nearby Independence, Missouri, also passed through the county. Johnson County was established in 1855 as one of the first counties in the newly organized Kansas Territory; it was named for American missionary Thomas Johnson. The renowned gunfighter Wild Bill Hickok settled for a time in the county, becoming constable of Monticello Township in 1858.

Johnson County was the site of many battles between abolitionists and pro-slavery advocates during the period of Bleeding Kansas, prior to the residents voting on whether slavery would be allowed in the territory. In 1862 during the American Civil War, Confederate guerrillas from nearby Missouri, led by William Quantrill, raided the Johnson County communities of Olathe and Spring Hill. They killed half a dozen men and destroyed numerous homes and businesses.

The county was largely rural until the early 20th century, when housing subdivisions were developed in the northeastern portion of the county adjacent to Kansas City, Missouri. Developer J.C. Nichols spurred the boom in 1914 when he built the Mission Hills Country Club to lure upscale residents who previously had been reluctant to move from Missouri to Kansas. Suburban development continued at a steady pace until the close of World War II.

Following the war, the pace of development exploded, triggered by the return of veterans in need of housing, construction of highways that facilitated commuting from suburbs, and the pent-up demand for new housing. The US Supreme Court ruling in Brown v. Board of Education (1954) ruled that segregation of public schools was unconstitutional. Integration of public schools in Kansas City, Missouri resulted in many white families leaving the inner city, resulting in increased migration to the county for new housing and what were considered higher quality public schools, generally an indicator of higher economic status. From the mid-1980s the pace of growth increased significantly, with the county adding 100,000 residents each decade between the 1990 census and 2010 census.

The natural topography of the county consists of gently rolling terrain. The Kansas River forms a portion of the northwest boundary of the county. The elevation generally increases from north to south as the distance from the Kansas and Missouri rivers increases.

The county is drained by the watersheds of the Kansas, Blue, and Marais des Cygnes, all of which are part of the Missouri River watershed. Located in northeastern Kansas, the county receives plentiful rainfall. The county contains numerous small streams, including Kill Creek, Mill Creek, Turkey Creek, Indian Creek, Brush Creek, Tomahawk Creek, the Blue River, Bull Creek and Little Bull Creek.

Kill Creek begins in the southwest portion of the county and flows northward into the Kansas River at DeSoto. Mill Creek begins in the central portion of the county in Olathe, flowing northward it empties into the Kansas River at Shawnee. Turkey Creek and Brush Creek each begin in northeast Johnson County. Turkey Creek flows northeastward into Wyandotte County and joins the Kansas River just before its confluence with the Missouri River at Kaw Point. Brush Creek flows east-northeastward through Prairie Village and Mission Hills, entering Kansas City, Missouri within the median of Ward Parkway and passing the Country Club Plaza before emptying into the Blue River east of the Country Club Plaza and north of Swope Park. Indian Creek begins in the southern portion of Olathe and Tomahawk Creek begins in south Overland Park. Each flows northeastward meeting in Leawood, where the stream retains the name of Indian Creek, just before crossing the state line and entering the Blue River in Kansas City, Missouri. The Blue River begins in rural southern Johnson County and flows north-northeastward through the southeastern portion of the county and crossing the state line just east of the intersection of 151st Street and Kenneth Road in southern Overland Park. The Blue River flows through southern and eastern Kansas City before joining the Missouri River. Bull Creek and Little Bull Creek begin in rural southwestern Johnson County and flow southward where they enter Hillsdale Lake before continuing into Miami County, eventually joining the Marais des Cygnes at Paola.

The county consists primarily of prairie grassland with corridors of forested areas along streams and rivers. 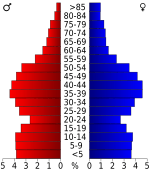 Johnson County is included in the Kansas City, MO-KS Metropolitan Statistical Area. The county has the highest median household income and highest per-capita income in Kansas, with the 19th highest median household income in 2000 and the 46th highest per-capita income in 2005. In 2010, Money magazine, in its list of the '100 Best Cities in the United States' in which to live, ranked Overland Park 7th (ranked 6th in 2006 and 9th in 2008) and Shawnee 17th (ranked 39th in 2008). In 2008 the same magazine also ranked Olathe 11th.

There were 210,278 households out of which 34.6% had children under the age of 18 living with them, 56.1% were married couples living together, 8.4% had a female householder with no husband present, and 31.8% were non-families. 25.9% of all households were made up of individuals and 7.8% had someone living alone who was 65 years of age or older. The average household size was 2.51 and the average family size was 3.05.

Johnson County has a grid network through most of the county, with a road every mile. The grid has facilitated rapid growth and easy access. Interstate 435 runs through much of the county, and serves as a developmental "border" in the northbound–southbound portion. The westbound–eastbound part of I-435 divides the county into a northern and southern section. The northern section is older, while the southern portion is the fastest-growing area in Johnson County, containing a massive volume of new homes.

The Johnson County numbered street grid generally begins at 47th Street, the Wyandotte County line (the lowest numbered street is 40th Street in Bonner Springs), and is a continuation of the adjacent Kansas City, Missouri street grid. The grid continues to 215th Street, and into Miami County (with somewhat different named roads) to 407th Street at the Miami-Linn county line, with most suburban development ending around 159th Street. Named streets in the grid run from State Line Road (1900 West) to County Line Road (40699 West) at the Douglas County line. A portion of the grid extends north from Westwood into the Rosedale area in Kansas City, Kansas.

Another principal highway running through the area is Interstate 35, which runs diagonally through the county, entering it near Downtown Kansas City, Missouri and continuing through Olathe and Gardner. Outside the county, it eventually leads to Duluth, Minnesota in the north and the US–Mexico border in the south. U.S. 69 also serves Johnson County, entering from Wyandotte County at the south end of Interstate 635. Much of U.S. 69 within the county is freeway; this freeway eventually heads south and connects to Fort Scott and the rest of southeast Kansas. 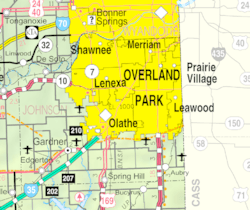 Johnson County was originally divided into nine townships, two of which have since been eliminated by the annexation of all their territory into independent municipalities. All of the cities are considered governmentally independent and are excluded from the census figures for the townships. In the following table, the population center is the largest city (or cities) included in that township's population total, if it is of a significant size.

All content from Kiddle encyclopedia articles (including the article images and facts) can be freely used under Attribution-ShareAlike license, unless stated otherwise. Cite this article:
Johnson County, Kansas Facts for Kids. Kiddle Encyclopedia.