Mission Hills is a city in Johnson County, Kansas, United States, and part of the Kansas City Metropolitan Area. As of the 2010 census, the city population was 3,498. The east city limits is the Kansas-Missouri state line at State Line Road. Mission Hills was originally developed by noted Kansas City developer J. C. Nichols beginning in the 1920s as part of his Country Club District plan. 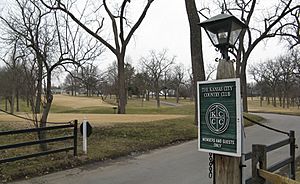 An Indian mission was established at the town's site in the 1830s, hence the name of the later settlement.

The city started as a planned upscale community for the elite by J.C. Nichols to be built around the Mission Hills Country Club (Kansas) on the hills above Brush Creek just south of the Shawnee Methodist Mission. Most of the country club's property is in Kansas but its original clubhouse was in Kansas City, Missouri, allowing it to serve liquor, which was prohibited on the Kansas side. Nichols laid out plans in 1914. He had developed the country club to enhance the value of his Kansas properties after discovering that upscale buyers were reluctant to live on the Kansas side of the state line.

Nichols opposed incorporation of the community fearing that a city would not adequately meet the needs of its residents or properly enforce housing covenants. Consequently, the Mission Hills Home Company was founded on August 18, 1914. One of the most publicized early enforcements involved forbidding the family of a sick woman to enclose her porch with glass.

Faced with prospects of annexation by neighboring relatively lower income communities seeking its wealthy tax base, Mission Hills incorporated as a city in 1949.

Many of the early houses were designed by Clarence E. Shepherd, Edward Tanner, and Edward Buehler Delk.

The city's most distinctive landmark, which is used on the official city seal, is the Verona columns and reflecting pool at the intersection of Ensley Lane, Mission Drive and Overhill Road. They were conceived by landscape architect S. Herbert Hare in 1924.

In 1928 Ernest Hemingway and his pregnant wife, Pauline, stayed at the house of W. Malcolm and Ruth Lowry at 6435 Indian Lane. During this time, Hemingway wrote A Farewell to Arms. He later gave an autographed copy of the book to Don Carlos Guffey, the Kansas City doctor who delivered his son Patrick. The inscription, which is now in the University of Missouri-Kansas City library, said "...with much admiration and grateful remembrance of a Caesarean that was beautifully done and turned out splendidly."

There were 1,253 households of which 37.0% had children under the age of 18 living with them, 79.7% were married couples living together, 3.8% had a female householder with no husband present, 1.6% had a male householder with no wife present, and 14.9% were non-families. 12.9% of all households were made up of individuals and 8% had someone living alone who was 65 years of age or older. The average household size was 2.79 and the average family size was 3.07.

There were 1,284 households out of which 38.5% had children under the age of 18 living with them, 81.2% were married couples living together, 3.7% had a female householder with no husband present, and 14.0% were non-families. 12.5% of all households were made up of individuals and 7.6% had someone living alone who was 65 years of age or older. The average household size was 2.80 and the average family size was 3.06.

The Johnson County Library serves the residents of Mission Hills.

Mission Hills is the setting for the ABC Family television drama Switched at Birth. The show is set in Kansas City, Missouri, but the main characters live in Mission Hills.

Mission Hills was ranked number 3 on the Forbes list of America's most affluent neighborhoods.

All content from Kiddle encyclopedia articles (including the article images and facts) can be freely used under Attribution-ShareAlike license, unless stated otherwise. Cite this article:
Mission Hills, Kansas Facts for Kids. Kiddle Encyclopedia.