Bonner Springs is a city in Johnson, Leavenworth, and Wyandotte counties in the State of Kansas, and part of the Kansas City Metropolitan Area. As of the 2010 census, the city population was 7,314. Bonner Springs is reputed to be the first commercial center and permanent settlement in Kansas in the year 1812. Bonner Springs was incorporated as a City on November 10, 1898.

Bonner Springs is home to several national and regional attractions including the Providence Medical Center Amphitheather, the National Agricultural Center and Hall of Fame, and the annual Kansas City Renaissance Festival.

Spanish explorer Francisco Vázquez de Coronado spent the winter of 1541-1542 at what is now Bonner Springs. The diary of Father Juan Padilla records that the expedition reached the 40th degree (Kansas northern border) and came to a great river (the Missouri). An inscription found on a stone near Atchison has been translated as, "Thus far came Francisco de Coronado, General of an Expedition." The explorers traveled downstream to the mouth of another great river, the Kansas, and preceded upstream 16 leagues to camp in what is now Bonner Springs before returning to Mexico. Due to the mineral springs, this legend gave the area its first recorded name, Coronado Springs.

The Kanza tribe had settled the area because of the mineral springs and abundant fish and game when, in 1812, two French fur traders, the Chouteau brothers, made their way from St. Louis Missouri and settled in the area that would become Bonner Springs, starting a trading post named Four Houses. This makes the site of Bonner Springs the first settlement in what would become the State of Kansas. The location allowed easy access to trade items, and ferry to cross the Kansas River was added. In 1830, Henry Tiblow, a Delaware Indian, took charge of the ferry. Tiblow was a Delaware Indian who worked as an interpreter for the government. He lived in a small cabin on the west side of the city.

The location became known as Tiblow Settlement, and the ferry continued working for years. John McDanield, or "Red John" due to hair color, is known as the founder of Bonner Springs - as we know it today. As the owner of a vast majority of land that is now Bonner Springs, McDaniel named the town Tiblow, after his friend Henry.

Several of the springs in the area were analysed for their mineral content, and the results indicated benefits that would attract visitors. The Bonner Springs Improvement Club, in 1907, created a promotional brochure touting the city as the “Kansas Karlsbad” and listing the contents of five springs near Lake of the Woods: Big Chief, Little Chief, Papoose, Old Squaw and Minnehaha. They listed “grains per gallon” of things like potassium sulphate, carbonate of iron, and chloride of sodium for each.

Big Chief was noted to be “splendid water for anemics, supplying the necessary properties for good red blood and driving out the dead and impure corpuscles.”

Old Squaw was reportedly so named because “the old women of Indian tribes once living in Kansas found relief from their intense dyspepsia caused by their heavy meat diet and little or no exercise.”

To promote the springs, a special train brought investors to the area and cited its proximity to Kansas City, the springs themselves, the fine parks and native trees, the site of a racetrack, and the beautiful residential sites as advantages that would assure the success of the mineral spring venture. In 1885, Philo Clark purchased 300 acres from McDanield, this plans to capitalize on the mineral springs, then he changed the name of the town to Bonner Springs. The latter portion of the name comes from a mineral spring in the area said to have medicinal qualities. The town was also named after Robert E. Bonner, a publisher of the New York Ledger, who was a trotting-horse breeder of note, and Clark believed would help fund the proposed racetrack. However, this is no record this occurred.

Citizens wander Oak Street, looking at the burned out building shells after the October 1908 fire

Bonner Springs continued to be prosperous, with a growing population and new businesses. In 1908, a fire caused over $70,000 - over $350,000 in today's dollars - worth of damage and destroyed between 19 and 21 local businesses. There were no water mains at the time, even though the city council had debated the issue for some time.

Many locals came to the rescue, forming a water bucket chain to help put out the fire, while they waited for a fire truck from Kansas City to arrive. An investigation indicated that materials behind Kelly & Pettit's Drug Store had caught on fire, and the winds carried the flames, making the fire difficult to control. Residents of Bonner Springs undertook thousands of dollars worth of repairs.

There were 2,810 households of which 35.2% had children under the age of 18 living with them, 48.6% were married couples living together, 14.2% had a female householder with no husband present, 5.5% had a male householder with no wife present, and 31.8% were non-families. 25.7% of all households were made up of individuals and 9.8% had someone living alone who was 65 years of age or older. The average household size was 2.59 and the average family size was 3.11.

There were 2,592 households out of which 35.8% had children under the age of 18 living with them, 53.5% were married couples living together, 12.6% had a female householder with no husband present, and 29.6% were non-families. 24.7% of all households were made up of individuals and 10.8% had someone living alone who was 65 years of age or older. The average household size was 2.59 and the average family size was 3.11.

Bonner Springs is home to the Providence Medical Center Amphitheater, first opened in 1984 as the Sandstone Amphitheater. This open-air venue can seat an 18,000 guests, including 3,100 box and reserved seats. The venue has undergone renovations, including an improved layout for seating and state-of-the-art sound and video systems. 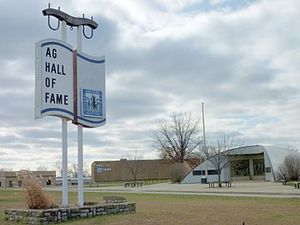 Bonner Springs is home to the National Agricultural Center and Hall of Fame, a privately funded charitable institution chartered by the U.S. Congress to "educate society on the historical and present value of American agriculture and to honor leadership in Agri-Business and Academia by providing education, information, experience and recognition."

The city is host of the annual Kansas City Renaissance Festival. The fair begins on Labor Day weekend and continues for seven weekends, open on Saturdays and Sundays as well as Labor Day and Columbus Day. The fair began in 1977 as a benefit for the Kansas City Art Institute, and became a stand-alone event in the late 1990s. The fair has 165 booths and 13 stages, entertaining 180,000 patrons annually on 16 operating days.

Each year, during the last weekend of August, the city hosts Tiblow Days, a heritage festival in honor of early settler Henry Tiblow, and former name of the community.

River transportation was important to early Bonner Springs, Kansas, as its directly located on the Kansas River afforded easy access to trade. A portion of I-70 was the first project in the United States completed under the provisions of the new Federal-Aid Highway Act of 1956 (though not the first constructed or to begin construction). Bonner Springs is located directly on or near several transportation corridors including roadways, rail, and river access.

Bonner Springs is served with direct routes to one interstate highway, two state highways and one national highway:

All content from Kiddle encyclopedia articles (including the article images and facts) can be freely used under Attribution-ShareAlike license, unless stated otherwise. Cite this article:
Bonner Springs, Kansas Facts for Kids. Kiddle Encyclopedia.