Wyandotte County ( county code WY) is a county located in the U.S. state of Kansas. As of the 2010 census, the population was 157,505, making it the fourth-most populous county in Kansas. Its county seat and most populous city is Kansas City, with which it shares a unified government. Wyandotte County lies immediately west of Kansas City, Missouri.

The county is named after the Wyandot (also known as Wyandott or Wyandotte) Indians. They were called the Huron by the French in Canada, but they called themselves Wendat. They were distantly related to the Iroquois, with whom they sometimes fought. They had hoped to hold off movement by white Americans into their territory and had hoped to make the Ohio River the border between the United States and Canada.

One branch of the Wyandot moved to the area that is now the state of Ohio. They generally took the course of assimilation into Anglo-American society. Many of them embraced Christianity under the influence of missionaries. They were transported to the current area of Wyandotte County in 1843, where they set up a community and worked in cooperation with Anglo settlers. The Christian Munsee also influenced early settlement of this area.

The county was organized in 1859. Tenskwatawa (Tecumseh's brother), "the Prophet", fought at the Battle of Tippecanoe in 1811. He was buried at Shawnee Native American historical site Whitefeather Spring (located at 3818 Ruby Ave., Kansas City, which was added in 1975 to the National Register of Historic Places). The Kansas City Smelting and Refining Company employed over 250 men during the 1880s. The ore and base bullion is received from the mining districts of the mountains and is here crushed, separated and refined.

The Delaware Crossing (or "Military Crossing"; sometimes "the Secondine") was where the old Indian trail met the waters of the Kaw River. Circa 1831, Moses Grinter (one of the earliest permanent white settlers in the area) set up the Grinter Ferry on the Kansas River here. His house was known was the Grinter Place. The ferry was used by individuals (such as traders, freighters, and soldiers) traveling between Fort Leavenworth and Fort Scott on the military road. Others would cross this area on their way to Santa Fe.

The Diocese of Leavenworth moved its see from Leavenworth, Kansas to Kansas City, Kansas on 10 May 1947. It became an Archdiocese on 9 August 1952. 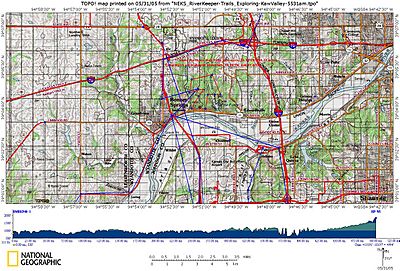 The county is drained by the watersheds of the Kansas River which is part of the Missouri River watershed. Being located in northeastern Kansas, the county receives plentiful rainfall. 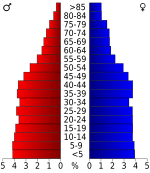 Approximately 1.4% of the county's residents use public transportation to get to work. This is the highest percentage in the state.

Wyandotte County has a single township. The cities of Bonner Springs, Kansas City, and Lake Quivira are considered governmentally independent and are excluded from the census figures for the township. In the following table, the population center is the largest city (or cities) included in that township's population total, if it is of a significant size.

The 2010 census lists the city of Edwardsville as also governmentally independent, with the size of the remaining township dropping to a population of 31 persons living on only 2.43 sq mi of land (and 0.36 sq mi water) resulting in a population density of 12.76 / sq mi (4.93 / km²). The departure of Edwardsville is also confirmed by the Kansas State Historical Society.

All content from Kiddle encyclopedia articles (including the article images and facts) can be freely used under Attribution-ShareAlike license, unless stated otherwise. Cite this article:
Wyandotte County, Kansas Facts for Kids. Kiddle Encyclopedia.