Osawatomie is a city in Miami County, Kansas, United States, 61 miles (98 km) southwest of Kansas City. As of the 2010 census, the city population was 4,447. It derives its name from two streams nearby, the Osage and Potawatomie. 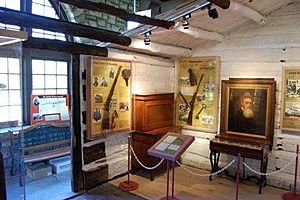 Osawatomie's name is a compound of two primary Native American Indian tribes from the area, the Osage and Pottawatomie. In addition, the town is bordered by Pottawatomie Creek and the Marais des Cygnes River (part of the Osage River system), which are also named for the two tribes.

The Emigrant Aid Society's transport of settlers to the Kansas Territory as a base for Free State forces played a key role in the establishment of the community of Osawatomie in October 1854. Settled by abolitionists in hopes of aiding Kansas' entry to the United States as a free state, the community of Osawatomie and pro slavery communities nearby were quickly engaged in violence.

In March 1855, abolitionists Rev. Samuel Adair and his wife Florella settled in a cabin near Osawatomie to serve as missionaries to the community. Florella's half-brother, John Brown came to "Bleeding Kansas" later the same year with a wagon of guns in order to help fight the pro slavery forces like his five sons, who were already living in another community in the area. Brown then came to Osawatomie to visit the Adairs and fight pro slavery forces there. By 1856, having established himself as a leader of free state guerillas, Brown made Osawatomie and the Adair cabin his base. In a raid in May 1856, Brown killed five pro slavery men along Pottawatomie Creek near the current town of Lane, Kansas. This was then referred to as the "Pottawatomie massacre", which inflamed the fighting throughout the Kansas Territory. The second and main Battle of Osawatomie took place on August 30, 1856. Osawatomie played a key role throughout the Civil War, serving as a center for Jayhawker activity.

By 1857 Osawatomie had grown to a town of 800 and in 1859 hosted the first convention of the Kansas Republican Party. In recognition for Osawatomie's part in ensuring Kansas remained a free state, the Kansas Legislature established the Osawatomie State Mental Hospital in 1863, the first mental hospital west of the Mississippi River. It admitted its first patient in 1866, and is still operational. By 1879, a railroad was built to serve Osawatomie, aiding its growth into a supply town and a main shipping point. As a result, Osawatomie grew to a population of 4,046 by 1910. Osawatomie was a division point for the Missouri Pacific Railroad and the Union Pacific Railroad from 1879 to 1985.

Osawatomie was chartered in 1883 and in 1890 became a second-class city. The commission form of government was adopted in 1914. 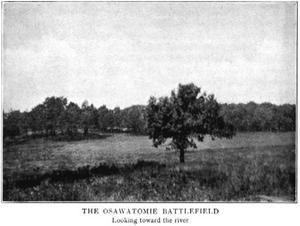 The first skirmish in Osawatomie took place on June 7, 1856. However, there was not much of a fight, and no blood was shed. The town's buildings were plundered, and some horses were taken. The larger, and main conflict known as the Battle of Osawatomie began August 30, 1856 as John Brown was camped just north Osawatomie and looking east for pro-slavery forces. A pro-slavery force of 250, led by John William Reid, came riding into Osawatomie from another direction. One of John Brown's sons Frederick Brown was walking to the Adair cabin at the time, and was shot. When Reverend Adair heard the shot, he sent his own son to warn and notify John Brown of the raid. Brown and 31 of the free state guerillas took positions to attempt to defend Osawatomie. Heavy gunfire took place for over 45 minutes, until Brown and his men ran out of ammunition. They retreated hoping they would be chased, and the community of Osawatomie would be left alone. However, despite the attempts of Brown to get Reid's men to follow, they instead looted and burned Osawatomie. Only three buildings remained standing when it was over. 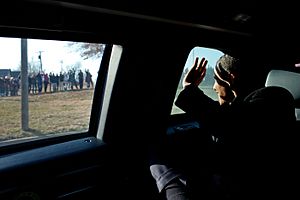 President Obama waving to Kansans after his economic speech in Osawatomie, Kansas on December 6, 2011.

The climate in this area is characterized by hot, humid summers and generally mild to cool winters. According to the Köppen Climate Classification system, Osawatomie has a humid subtropical climate, abbreviated "Cfa" on climate maps.

Osawatomie is part of the Kansas City metropolitan area. 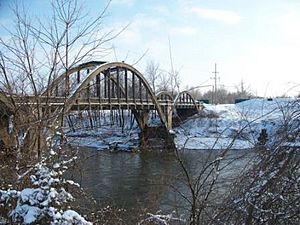 Osawatomie has several historical places, 5 of which are listed on the National Historic Register.

Other historic places in or around Osawatomie include: 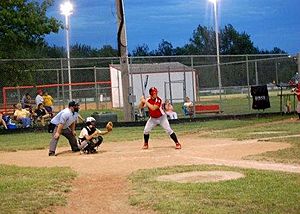 The community of Osawatomie offers a museum and driving tour for learning of its history, and also offers its residents various opportunities for recreation. There is an 18-hole golf course, and the Osawatomie City Lake for fishing. The USD 367 Sport and Fitness Zone (O-Zone) is also in Osawatomie, which has an indoor pool, a gymnasium, weight room, indoor track, and offers programs for all ages. The Karl E. Cole Sports Complex in Osawatomie is used for athletic events such as baseball, softball, soccer, and youth football.

In addition, Osawatomie is home to the John Brown Jamboree, an annual arts, crafts & music festival that is held each summer. Each October, an event called Talking Tombstones is held at Oakwood Cemetery, where individuals perform as historical figures buried there, in an effort to remember their lives and contribution to the community's history.

All content from Kiddle encyclopedia articles (including the article images and facts) can be freely used under Attribution-ShareAlike license, unless stated otherwise. Cite this article:
Osawatomie, Kansas Facts for Kids. Kiddle Encyclopedia.