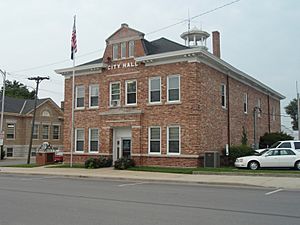 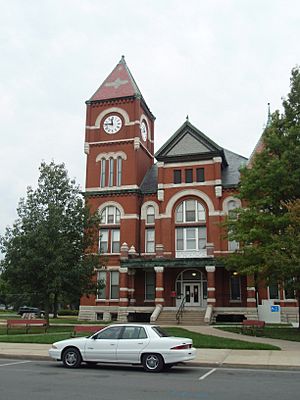 Native Americans, then Spanish explorers such as Francisco Vásquez de Coronado in 1541, and French missionary explorers in 1673 lived and traveled throughout the area of what is now Paola. Despite these early European incursions at the start of the 19th century, the area was largely controlled by the Osage people.

Settlement of the area primarily occurred, however, when Kaskaskia, Peoria, Wea, and Piankeshaw tribes were forced to move to the area between 1827 and 1832. These formed the Confederated Allied Tribe, which was led by Baptiste Peoria, who was of both French and Indian ethnicity. They called their settlement Peoria Village.

By the 1840s, Euro-American settlers were moving into the area, and several missionaries lived in and near "Peoria Village". One of those missionaries was an Italian priest who moved to the area in 1852. The priest, Father Paul D. Ponziglione, was credited with renaming Peoria Village to Paola, after a small town on the coast of Calabria, Italy. The Peoria Indians of the area continued to call it Paola, because they had great respect for Father Ponziglione.

By 1854 there was a large number of settlers who moved to the settlement, and a town plat was laid out by 1855. In 1855, the First Territorial Legislature passed an act that incorporated the Paola Town Company. The Paola Town Company and specifically its member Baptiste Peoria with his wife Mary Ann Isaacs are credited as being influential in the founding and development of Paola through the mid-1860s.

During the Civil War a military post was established on the west side of Bull Creek, just west of Paola. At times troops were inside Paola itself. Paola was barely spared an attack on August 21, 1863, by Confederate guerrilla William C. Quantrill during Quantrill's retreat after raiding Lawrence. Paola was 10 miles (16 km) west of the retreat of Confederate Maj. Gen. Sterling Price's force on October 24, 1864, while he was retreating toward Indian Territory. Paola's post was deactivated in August or September 1865.

Following Kansas' admission to the Union in 1861, and after the Civil War pressure to move the Native American tribes increased, and they were exiled to Oklahoma by 1868. Some individuals stayed and became citizens of the United States, however, their leader Baptiste Peoria left Paola with the tribe. From the late 1860s and through the 1870s, Paola grew and progressed, building its first school, jail, and bank.

The railroad came to serve Paola in 1870, which also aided its progress through this time. Following the discovery of natural gas in 1882, Paola became the first town west of the Mississippi River to use it commercially and have the town illuminated using natural gas lanterns. In 1898 the Miami County Courthouse was built, designed by architect George Washburn. Several homes and buildings were designed by Washburn, including the Paola Park's gazebo and the Paola Free Library. Martha Smith had the Paola Library building constructed in honor of her husband John, a wine maker. It was completed in 1906 and the Paola Park Square's Victorian-style gazebo is from 1913. The library, courthouse, gazebo, and several homes are among those still in use today.

In 1912, James Patterson moved to Paola to establish his winter quarters for his travelling circus, the Patterson Circus. The circus continued until 1927. A wall mural based on a 1924 circus pamphlet, is at 106 W. Peoria. The Patterson's home still stands in Paola in the 600 block of north Mulberry, as the only remaining structure from the circus winter headquarters. 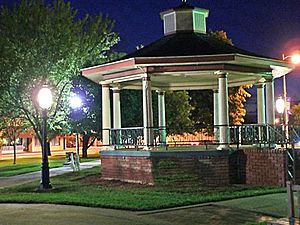 Paola's town square has much historical significance, beginning with the Indian tribes who once lived in the area and used it as their primary gathering place. Prior to their exile to Oklahoma, Indian leader Baptiste Peoria gave this area to the Paola Town Company (of which he was a member) as a treaty of peace. The Paola Town Company later gave the square to the City of Paola, with the provision that no building be built on it. This provision has been honored to this day. In 1867, the original gazebo was put on the square, and was a bandstand. In the 1800s the square was used as a track for racing horses in addition to serving as a central point for parades, celebrations, and other community events. In 1913, a new Victorian-style gazebo was built, designed by George Washburn. Today, the Paola Park Square is still honored as the center of the downtown area, and remains a central meeting and gathering place during various community events each year. The 1913 gazebo is still used, a common place for events such as weddings. Next to the gazebo are two replicas of the Wellsbach gas street lanterns that once illuminated Paola. Also near the gazebo in the Paola Square is a bust of Paola founders Baptiste Peoria and his wife, Mary Ann Isaacs Dagenet. It is the only known monument in the United States featuring a Native American and his wife. A fountain in the center of the square was also added for people to enjoy.

Paola is the largest city in Miami County and is the county seat. Paola offers residents and visitors several choices for shopping, entertainment and recreation. Annually, Paola hosts the Miami County Fair in July, the Roots Festival in August and the Harvest Festival in October. There is also a Christmas tree lighting ceremony, arrival of Santa, and carriage rides throughout the historic streets shortly after Thanksgiving. Also available is water recreation and camping at Lake Miola, a contemporary Aquatic Center in Wallace Park, the Swan River Museum, and the Miami County Historical and Genealogical Society, and a variety of events held at the Paola Community Center.

The climate in this area is characterized by hot, humid summers and generally mild to cool winters. According to the Köppen Climate Classification system, Paola has a humid subtropical climate, abbreviated "Cfa" on climate maps. 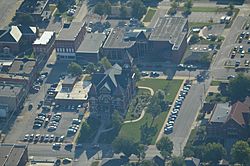 There were 2,173 households of which 35.8% had children under the age of 18 living with them, 47.1% were married couples living together, 13.4% had a female householder with no husband present, 4.2% had a male householder with no wife present, and 35.3% were non-families. 30.6% of all households were made up of individuals and 13.5% had someone living alone who was 65 years of age or older. The average household size was 2.45 and the average family size was 3.07.

There were 1,927 households out of which 34.7% had children under the age of 18 living with them, 48.3% were married couples living together, 12.1% had a female householder with no husband present, and 35.4% were non-families. 31.1% of all households were made up of individuals and 14.8% had someone living alone who was 65 years of age or older. The average household size was 2.45 and the average family size was 3.08.

All content from Kiddle encyclopedia articles (including the article images and facts) can be freely used under Attribution-ShareAlike license, unless stated otherwise. Cite this article:
Paola, Kansas Facts for Kids. Kiddle Encyclopedia.