Tipton County, Indiana is located in central Indiana, north of the state capital of Indianapolis. According to the 2010 census, the population was 15,936, a decrease of 3.9% from the 2000 population of 16,577. The county seat is Tipton. The county has four incorporated towns with a total population of about 7,000, as well as many small unincorporated communities. It is divided into six townships which provide local services. Three Indiana state roads and one U.S. Route cross the county, as do two railroad lines.

Before the arrival of non-indigenous settlers in the early 19th century, the area was inhabited by several Native American tribes. The county was officially established in 1844, one of the last Indiana counties to be settled. Tipton and Howard Counties were established by the same legislative action on January 15.

Prior to the arrival of non-indigenous settlers in the 1830s, the area now known as Tipton County was inhabited by the Miami and Delaware tribes. Tipton County was formed in 1844. It was named for John Tipton, a soldier of the Battle of Tippecanoe in 1811. Tipton served as United States Senator for Indiana from 1831 until shortly before his death in 1839.

The present courthouse was designed by Adolph Sherrer. He had taken over the Indiana Statehouse project when architect Edwin May died in 1880; five years after the completion of that project in 1888, Scherrer began work on the Tipton building, which was built of sandstone in a Romanesque style with a clock tower that rises 206 feet above the ground, including the flagstaff on top. It was built by Pierce and Morgan of Indianapolis during 1893 and 1894 at a cost of $170,988. It is one of several Romanesque courthouses dating from the 1890s that are still in use. 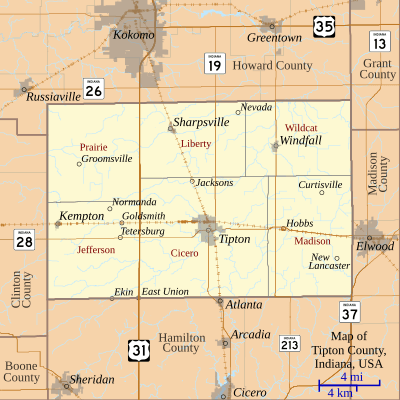 Tipton County lies in the central part of the state. One county, Hamilton, separates it from Indianapolis and Marion County to the south. To the north lies Howard County; to the west, Clinton County; and to the east, Madison County. A short portion of the eastern border, less than 2 miles (3.2 km) long, is shared with Grant County to the northeast.

Most of the county consists of level till plain with elevations from 850 feet (260 m) to 900 feet (270 m) above sea level. Prior to settlement by non-indigenous people, it was mostly covered with dense forests consisting of oak, beech, maple, walnut, hickory, sycamore and tulip trees. The southern part of the county has better natural drainage, and this area was first cleared for agriculture. Much of the rest of the county tended to be swampy due to the level ground and lack of sufficient natural waterways, so drainage channels had to be dug to make the land suitable for farming.

There are four incorporated settlements in the county. The largest is Tipton. Located near the center of the county, it is the county seat; its population in 2010 was 5,106.Kempton is located near the western border in Jefferson Township and has a population of 335. The town of Sharpsville is located near the northern border, in Liberty Township; its population is 607. Wildcat Township contains Windfall City, which has a population of 708. The city of Elwood lies in Madison County to the east and extends slightly over the border; as of the 2000 census, seven Elwood residents lived in Tipton County. The county also contains several unincorporated communities.

Tipton County is in the humid continental climate region of the United States along with most of Indiana. Its Köppen climate classification is Dfa, meaning that it is cold, has no dry season, and has a hot summer. In recent years, average temperatures in Tipton have ranged from a low of 15 °F (−9 °C) in January to a high of 83 °F (28 °C) in July, although a record low of −25 °F (−32 °C) was recorded in January 1994 and a record high of 98 °F (37 °C) was recorded in July 1999. Average monthly precipitation ranged from 1.67 inches (42 mm) in February to 4.24 inches (108 mm) in June. From 1950 through 2009, 13 tornadoes were reported in Tipton County, resulting in two deaths and several injuries; the total estimated property damage was over $3 million.

Another view of the courthouse

Tipton County's economy is supported by a labor force of about 7700 workers with an unemployment rate in December 2015 of 3.8%.

Historically, Tipton County's economy has been agriculturally based. In 1914, the county had 2,067 working farms and 166,400 acres of farm land. The early settlers raised corn, wheat, oats, rye, flax, and potatoes, with alfalfa in the prairie areas. Fruit was profitable in the county before 1880, but blight lessened yield and fruit growing nearly halted.

Vickrey Bank, founded in the 1880s, was the county's first bank. It became Union Bank, and later Farmers Loan and Trust. In 1876, the Tipton County Bank was founded. It merged with First National Bank in 1902. Other county banks included Citizens National Bank (1898), Farmers Loan and Trust Company (1906), People's State Bank (1892), Sharpsville Bank (1902), and State Bank of Kempton (1900). None of these banks exists today. Farmers' State Bank was formed in 1914 and remains in business today as First Farmers Bank & Trust.

In 1889, county schools had a total enrollment of 6,225. There were a total of 84 schools across the county. The majority of teachers were male, totaling 81 male and 19 female teachers. They were paid approximately $2 per day. By 1914, the school enrollment totaled 3,701 students, with 65 schools across the county. There were five high schools located across the township in Sharpsville, Tipton, Kempton, Goldsmith and Windfall. There were 218 teachers. They were paid $3.19 a day.

Tipton County has six schools, managed by three school corporations. The Tipton Community School Corporation includes an elementary school, a middle school, and a high school, all located in Tipton; these schools served a total of 1,821 students during the 2009–2010 school year. In the north part of the county, Tri-Central Community Schools (formerly Northern Community Schools) includes an elementary school and Tri-Central Middle/High School, both located in Sharpsville; these schools served a total of 970 students in 2009–2010. Saint John the Baptist School was located in Tipton and was part of the Diocese of Lafayette Catholic Schools; it was an elementary school and served 82 students during the 2009–2010 school year., but it closed in 2014 due to declining enrollment.

Though they do not run through the county, three other state roads touch its southeastern corner:

Two Norfolk Southern Railway routes run through the county. One line connects Muncie in the east with Frankfort in the west. The other connects Logansport and Kokomo in the north with Indianapolis in the south. The two lines intersect in Tipton.

All content from Kiddle encyclopedia articles (including the article images and facts) can be freely used under Attribution-ShareAlike license, unless stated otherwise. Cite this article:
Tipton County, Indiana Facts for Kids. Kiddle Encyclopedia.