Sharpsville is a town in the U.S. state of Indiana. Located in Liberty Township in Tipton County, it is part of the Kokomo, Indiana Metropolitan Statistical Area. As of the 2010 census, Sharpsville's population is 607. 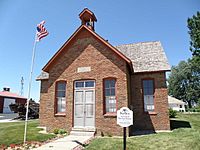 The town was named after founder E.M. Sharp, who originally was from Washington County, Pennsylvania. Sharp moved to Morgan County, Illinois in 1831, prior to relocating to Jennings County, Indiana in 1838. In spring 1849, he moved to Liberty Township. The town was platted on May 24, 1850, under the assumption that Sharpsville would become the county seat for Tipton Township (which became Tipton). A town square was incorporated into the town layout which became a public park rather than the location of a place of government. The town was incorporated in 1873, but it ceased to be incorporated by vote in 1881 and regained village status.

The Sharpsville post office has been in operation since 1851.

Many of the first buildings were churches. The First Methodist church in Sharpsville was built in 1852 and the Richland Evangelical Lutheran Church in 1857. In 1873, the Hopewell Presbyterian Church was founded 2.5 miles east of Sharpsville, with a building being completed for the congregation in 1874.

As the need for local education arose in 1852, Martha Ann Grishaw would become teacher of the first school in Sharpsville. School was held in a wooden cabin. The second school was taught by Lizzie Smith in a small house on the south-side of the town square. The earliest schools were subscription schools where citizens paid a fee to have their children educated. Later a Secondary school was founded as Sharpsville-Prairie High School. In 1970 the High School, along with Windfall High School, merged to form Tri-Central Middle/High School.

Sharpsville was home to participants in the American Civil War . On Aug. 9, 1861 a Company assembled in Sharpsville that would join the 26th Indiana Infantry Regiment.as Company C In all 78 listed on the Company C Roster listed Sharpsville as their town of residence. The 26th Infantry participated in military actions including the Battle of Prairie Grove and the Siege of Vicksburg.

In 1871 a four story grain elevator was built to allow local farmers a way to store grain. The silos had a capacity of 18,500 bushels. While the silos still stand the elevator was razed in 1990 due to aging of equipment. The grainery was serviced by the Nickel Plate Road a railroad that later become part of Norfolk Southern Railway. The now abandoned tracks once connected Sharpsville to Kokomo and Tipton. A train station that once stood on the South-East corner of Meridian Street and North Street was razed in 1967. In the early part of the 20th Century Sharpsville was serviced by an Interurban rail line operated by Union Traction Company. The line connected Sharpsville with Peru, Indiana to the North and Indianapolis to the South. As with most Interurbans the Sharpsville stop fell out of use by the mid 1920s.

The Sharpsville Cemetery, founded in 1875, is located south east of the town.

As of 1914, Sharpsville had a population of approximately 700.

There were 227 households of which 38.3% had children under the age of 18 living with them, 54.6% were married couples living together, 14.5% had a female householder with no husband present, 4.8% had a male householder with no wife present, and 26.0% were non-families. 21.1% of all households were made up of individuals and 7% had someone living alone who was 65 years of age or older. The average household size was 2.67 and the average family size was 3.05.

There were 232 households out of which 40.5% had children under the age of 18 living with them, 62.9% were married couples living together, 10.8% had a female householder with no husband present, and 22.8% were non-families. 19.4% of all households were made up of individuals and 10.8% had someone living alone who was 65 years of age or older. The average household size was 2.66 and the average family size was 3.03.

All content from Kiddle encyclopedia articles (including the article images and facts) can be freely used under Attribution-ShareAlike license, unless stated otherwise. Cite this article:
Sharpsville, Indiana Facts for Kids. Kiddle Encyclopedia.