Kids Encyclopedia Facts
Not to be confused with Washington City, Pennsylvania.

Washington County is a county located in the U.S. state of Pennsylvania. As of the 2010 census, the population was 207,820. Its county seat is Washington. The county was created on March 28, 1781, from part of Westmoreland County. The city and county were both named after American Revolutionary War leader George Washington, who eventually became the first President of the United States.

As of 1800, this county was largely settled by people of Scot-Irish heritage because "prime lands" were already taken by the Germans and the Quakers. 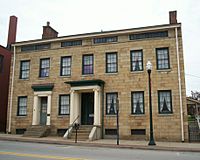 The F. Julius LeMoyne House serves as the headquarters of the Washington County Historical Society.

Washington County is the home of the PONY Baseball and Softball International Headquarters and is the home of the Pennsylvania Trolley Museum. Washington County is also famous for its Rock Shelters at Meadowcroft Village, which are one of the best preserved and oldest Pre-Clovis Native American dwellings in the country. The county has 21 covered bridges still standing.

The Whiskey Rebellion culminated in Washington. The home of David Bradford, one of the rebellion leaders, is located in Washington and is a national landmark. Just a couple blocks away is the F. Julius LeMoyne House, which serves as the headquarters of the Washington County Historical Society.

Washington County is the home of the first crematory in the United States.

In 1981, the Pennsylvania Historical and Museum Commission installed a historical marker noting the historic importance of the county. 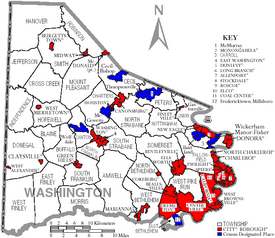 Under Pennsylvania law, there are four types of incorporated municipalities: cities, boroughs, townships, and, in at most two cases, towns. The following cities, boroughs and townships are located in Washington County:

The population ranking of the following table is based on the 2010 census of Washington County.

All content from Kiddle encyclopedia articles (including the article images and facts) can be freely used under Attribution-ShareAlike license, unless stated otherwise. Cite this article:
Washington County, Pennsylvania Facts for Kids. Kiddle Encyclopedia.