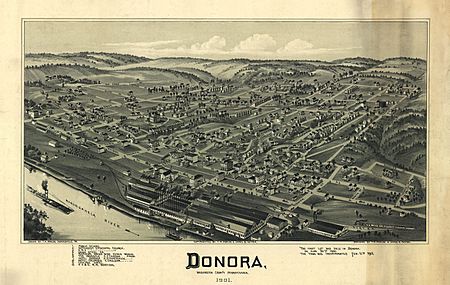 A pictorial map of Donora from 1901

Donora is a borough in Washington County, Pennsylvania, United States, approximately 20 miles (32 km) south of Pittsburgh on the Monongahela River.

Donora was incorporated in 1901. It got its name from a combination of William Donner and Nora Mellon, banker Andrew W. Mellon's wife. The borough's nickname is "The Home of Champions", mainly because of the large number of famous athletes who have called Donora their home, including Baseball Hall of Fame outfielders Stan Musial and Ken Griffey Jr.

Agriculture, coal-mining, steel-making, wire-making, and other industries were conducted in Donora early in its history.

Donora is a Rust Belt location which has lost most of its industrial capacity.

In 1794, the Whiskey Insurrectionists held several meetings at Fells Church, which is approximately 1 mile (1.6 km) east of Donora,.

A trolley line opened in Donora on December 15, 1901, linking First and McKean and Fifteenth Street and Meldon. It was extended in 1911 to Black Diamond to connect to the Charleroi to Pittsburgh interurban trolley. The line was abandoned on May 5, 1953.

The town was the scene of the infamous Donora Smog of 1948. Between October 26 and October 31, 1948, an air inversion trapped industrial effluent (air pollution) from the American Steel and Wire plant and Donora Zinc Works. "In three days, 20 people died... After the inversion lifted, another 50 died, including Lukasz Musial, the father of baseball great Stan Musial. Hundreds more finished the rest of their lives with damaged lungs and hearts. But another 40 years would pass before the whole truth about Donora's bad air made public-health history." Today, the town is home to the Donora Smog Museum which tells the impact of the Donora Smog on the air quality standards enacted by the federal government in subsequent years.

Donora is also listed on the National Register of Historic Places for its famous neighborhood known as "Cement City". The homes built in the neighborhood are completely made out of pre-formed and poured concrete. This structural building technique was championed by Thomas Edison and there are additional neighborhoods throughout the United States that have also used this technique. The homes were built as employee housing for the Donora Wire and Steel Mill in the early 1900s."

The Cement City Historic District and Webster Donora Bridge are listed on the National Register of Historic Places.

The climate in this area is characterized by hot, humid summers and generally mild to cool winters. According to the Köppen Climate Classification system, Donora has a humid subtropical climate, abbreviated "Cfa" on climate maps.

All content from Kiddle encyclopedia articles (including the article images and facts) can be freely used under Attribution-ShareAlike license, unless stated otherwise. Cite this article:
Donora, Pennsylvania Facts for Kids. Kiddle Encyclopedia.