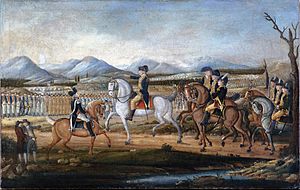 The Whiskey Rebellion was a rebellion against the Federal government of the United States. Some farmers in Western Pennsylvania rebelled against the United States federal government in 1794. They believed that a new tax on whisky was not fair. Selling whiskey was how people traded things in Western Pennsylvania, but farmers elsewhere did not need to sell whiskey.

The United States had borrowed a large amount of money for the American Revolutionary War, and Alexander Hamilton offered the idea to try to pay the war debt. The government under George Washington, with advice from Alexander Hamilton, quickly stopped the rebellion. Washington and Hamilton wanted to ensure that no one would question the power of the federal government, so President Washington himself led almost 13,000 troops to stop the rebellion of a few hundred farmers. The rebels went home before the army arrived. The new government became more solid, and the President more powerful. Numerous examples of resistance are recorded in court documents and newspaper accounts.

So far, this is the only time in American history that a President has led the Army by himself.

All content from Kiddle encyclopedia articles (including the article images and facts) can be freely used under Attribution-ShareAlike license, unless stated otherwise. Cite this article:
Whiskey Rebellion Facts for Kids. Kiddle Encyclopedia.