Green Hills is a borough in Washington County, Pennsylvania, United States. The borough was formed in 1978 when a local businessman worked to secede from the dry township of South Franklin after voters there defeated a referendum that would allow alcohol sales at his country club. The population was 18 at the 2000 census, making it the third least populous borough in the state; only S.N.P.J. and Centralia had fewer residents. Pennsylvania law has since been changed to require at least 500 residents in a newly formed borough. 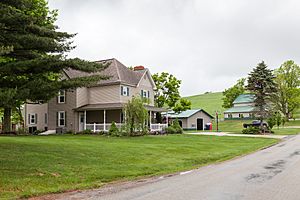 A house in the borough

There were 7 households, out of which 3 had children under the age of 18 living with them, 5 were married couples living together, and 2 were non-families. Two households were made up of individuals, and none had someone living alone who was 65 years of age or older. The average household size was 2.57 and the average family size was 3.20.

All content from Kiddle encyclopedia articles (including the article images and facts) can be freely used under Attribution-ShareAlike license, unless stated otherwise. Cite this article:
Green Hills, Pennsylvania Facts for Kids. Kiddle Encyclopedia.