West Brownsville is a former important transportation nexus and a present-day ‹See Tfd›borough in Washington County, Pennsylvania, United States and part of the Pittsburgh metropolitan area. The population was 1,075 at the 2000 census. Culturally, by postal route, and socially, the community is part of cross-river sister-city ‹See Tfd›Brownsville, for the two were long joined by the Amerindian trail known as Nemacolin's Path that became a wagon road after the American Revolution. Brownsville was the first point where the descent from the Appalachians could safely reach the river down the generally steep banks of the Monongahela River. Between Brownsville and West Brownsville was a shallow stretch, usable as a ‹See Tfd›river ford astride a major Emigrant Trail to the various attractive regions in the Northwest Territory, the first National Road, the Cumberland Pike (Now U.S. Route 40 ).

West Brownsville sited on the inside of the sweeping curve along the Monongahela River was blessed with relatively level ground opposite the cut bank effect giving Brownsville relatively steep slopes and West Brownsville, cupped by the inside of the curve, more flood prone sandy mud flats lands. Historically, at a bit upstream of the location of the Brownsville-West Brownsville Bridge was the Amerindian crossing ford and wagon road of early westward migrants. A few hundred yards west from the shoreline, PA Route 88 enters from along the riverside bluff and the south as Lowhill Road and hugs the foot of the steep Pennsylvania hillsides flanking tongue-shaped flat terrain of the streets and housing through most of the length of W. Brownsville before twisting left uphill. It exits the W. Brownsville flat climbing Northwest as Blainsburg Road, climbing beside and below the bluff of ‹See Tfd›Blainsburg, a larger 'satellite' bedroom community really an extension of the community, situated above West Brownsville proper, to its North-Northwest.

The steep bluff behind the West Brownsville tongue provided two climbable ascents which became early U.S. roads; the more southerly heading nearly due west climbing steadily upwards over a 2.5 miles (4.0 km) stretch, an old wagon road, and later the National Road following the westward extension of Nemacolin's Path up to and through the outlier neighborhood known as ‹See Tfd›Malden from a river-shallows area known as a ford to Amerindians, a landscape feature which attracted settlers heading west on the Emigrant Trail once known as Nemacolin's Path, then the Cumberland Road and then renamed as the 'National Road'. The other ascent would allow PA Route 88 to climb out of the valley where the road cut across several loops of the Monongahela to ‹See Tfd›California. 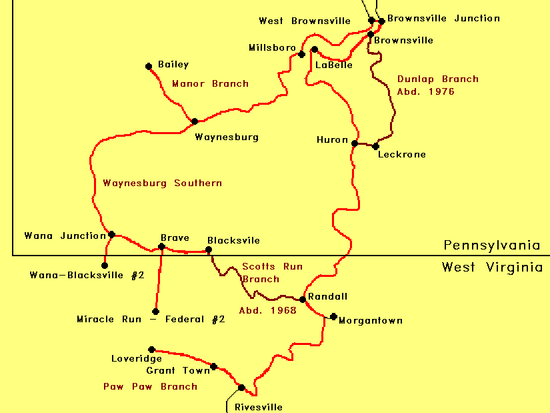 This map of the Monongahela Railroad Shortline shows the lower "Brownsville Junction" crossing bridge in between Brownsville and West Brownsville. The rail bridge is downriver from the former ferry ramps between the towns and both the old and new U.S. Route 40 bridges. Coke ovens lined the east bank trackage and the bridge off map to the north allowed entire trains to pull through and turn around for the run back to Fayette and Greene County, Pennsylvanian and West Virginian mines, keeping throughput up, and reducing the time dumping tracks were blocked by empty train consists of hopper cars. 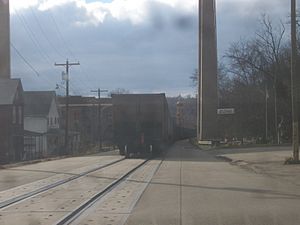 Sundered by the county boundaries running down the center of the river, West Brownsville economically was integrated with cross-river Brownsville by a ferry dating back into the early 1800s when Brownsville became a riverboat building and outfitting center. With construction of boats on nearby large tributaries, the shallow banks of West Brownsville were a favorite location to tie up and outfit a new built water craft to outfit it and load cargoes. The modern-day Main Street is notable for featuring on-street running by freight trains down the center of the street. Along with right bank ‹See Tfd›Brownsville on the opposite shore, West Brownsville and Brownsville hosted extensive rail yards jammed into the tight confines along both banks of the Monongahela River. One special feature at either end of the two railyards was they each shared a bridge joining two river crossing wyes that tied together to contain a rare true-life reversing loop, normally a feature only found in model railroading layouts. The yards serviced the extensive rail hopper car deliveries feeding the coking ovens up river along the southside of Brownsville, and were integral parts of the famous Pittsburgh Steal Industries. The Monongahela Railroad represented the Lake Erie, the PRR, and the B&O, and Norfolk and Western both utilized the trackage in the towns, which today is operated by the Norfolk and Southern successor, the Monongahela vanishing into the CONRAIL debacle.

There were 459 households out of which 24.4% had children under the age of 18 living with them, 51.0% were married couples living together, 10.5% had a female householder with no husband present, and 32.0% were non-families. 27.9% of all households were made up of individuals and 15.0% had someone living alone who was 65 years of age or older. The average household size was 2.34 and the average family size was 2.82.

All content from Kiddle encyclopedia articles (including the article images and facts) can be freely used under Attribution-ShareAlike license, unless stated otherwise. Cite this article:
West Brownsville, Pennsylvania Facts for Kids. Kiddle Encyclopedia.