California is a borough on the Monongahela River in Washington County, Pennsylvania, United States, and part of the Pittsburgh metropolitan area since 1950. The population was 6,795 as of the 2010 census and was estimated at 6,325 in 2018. California is the home of California University of Pennsylvania. Founded in 1849, the borough was named for the territory of California following the Gold Rush. The borough has had two notably young mayors—Democrat Peter Daley, who was 22 at his election, and Republican Casey Durdines, who was 20 at his election.

When founded in 1849, the town was named California, though Columbia and Sagamore were names that were also suggested for the new town. Before there were mayors in California, there were burgesses, the first of whom was Solomon Sibbitt. 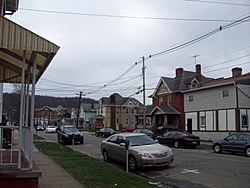 Near the university (which begins at the brick building in the background on the left), many large early-Twentieth Century houses have been converted into student apartments. 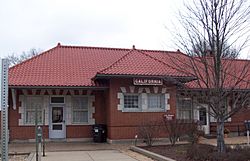 A converted train station serves as the California Public Library.

All content from Kiddle encyclopedia articles (including the article images and facts) can be freely used under Attribution-ShareAlike license, unless stated otherwise. Cite this article:
California, Pennsylvania Facts for Kids. Kiddle Encyclopedia.