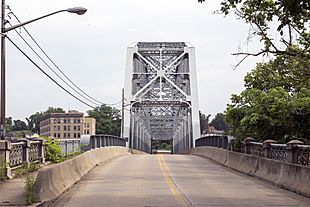 The West Brownsville-Brownsville Bridge was completed in 1914 to replace an 1831 wooden structure that was ill-suited for the vehicular traffic that the National Road was beginning to carry, as motorized vehicle traffic began replacing animal powered transportation technologies. The famous federal route has crossed the river at this point since its inception, with ferry service in the early nineteenth century. In 1960, the Lane Bane Bridge was constructed just downstream and U.S. Route 40 was moved to the new high-level structure. Currently, the route serves local traffic and is meant to tie together the interconnected towns on each bank.

It is designated as a historic bridge by the Washington County History & Landmarks Foundation.

All content from Kiddle encyclopedia articles (including the article images and facts) can be freely used under Attribution-ShareAlike license, unless stated otherwise. Cite this article:
Brownsville Bridge Facts for Kids. Kiddle Encyclopedia.